Then we drove west along county and state roads through the rolling landscape of southeastern South Dakota: dark green soybean fields, lighter green corn fields, a few scattered stands of trees, and every ten or twenty miles a little town. We stopped for lunch in Tyndall, the county seat of Bon Homme County. After lunch, we walked and drove around the town. The railroad line had been abandoned, but the grain elevators were still next to the old train tracks, and they were still being used. There were half a dozen restaurants in town, a couple of banks, an old fire house now being used as the county food pantry, an old power plant building and a new municipal building, a park with grass and trees and a small pond and a playground, a pleasant red-brick library building, and a stone county courthouse. 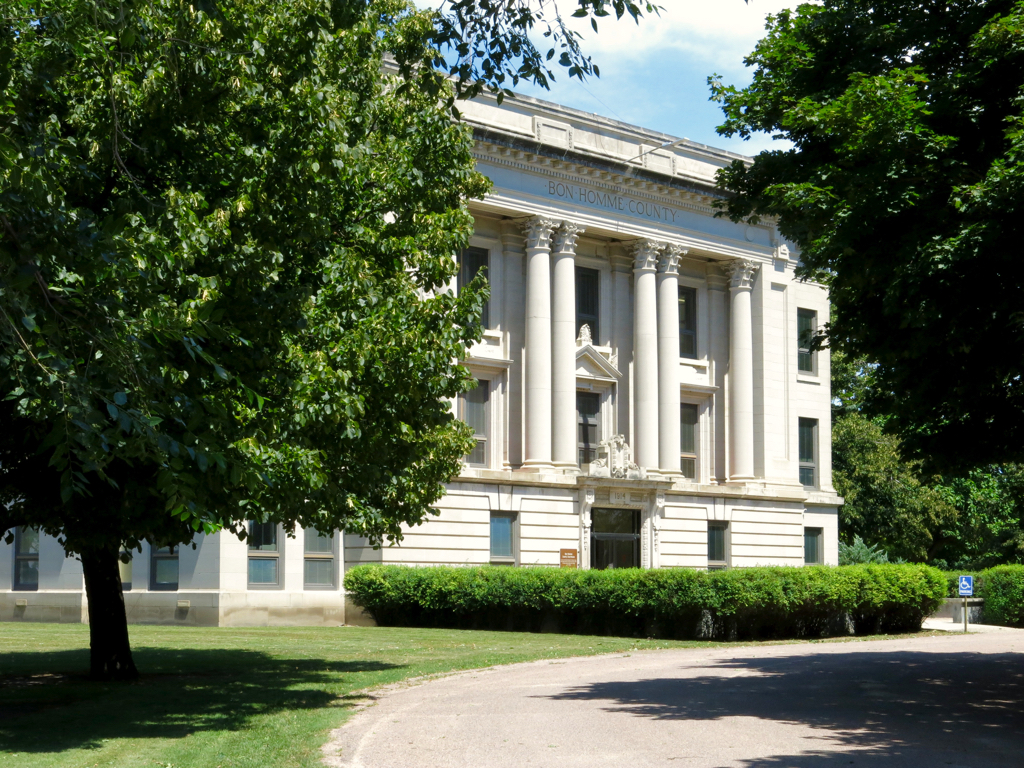 The town looks fairly prosperous, though the newer buildings are made of inexpensive materials and lack ornamentation. The most impressive buildings — small, but solid, built of stone and brick, with modest but interesting ornamentation — bore dates from just before the First World War. Presumably, that was the economic heyday of Tyndall. 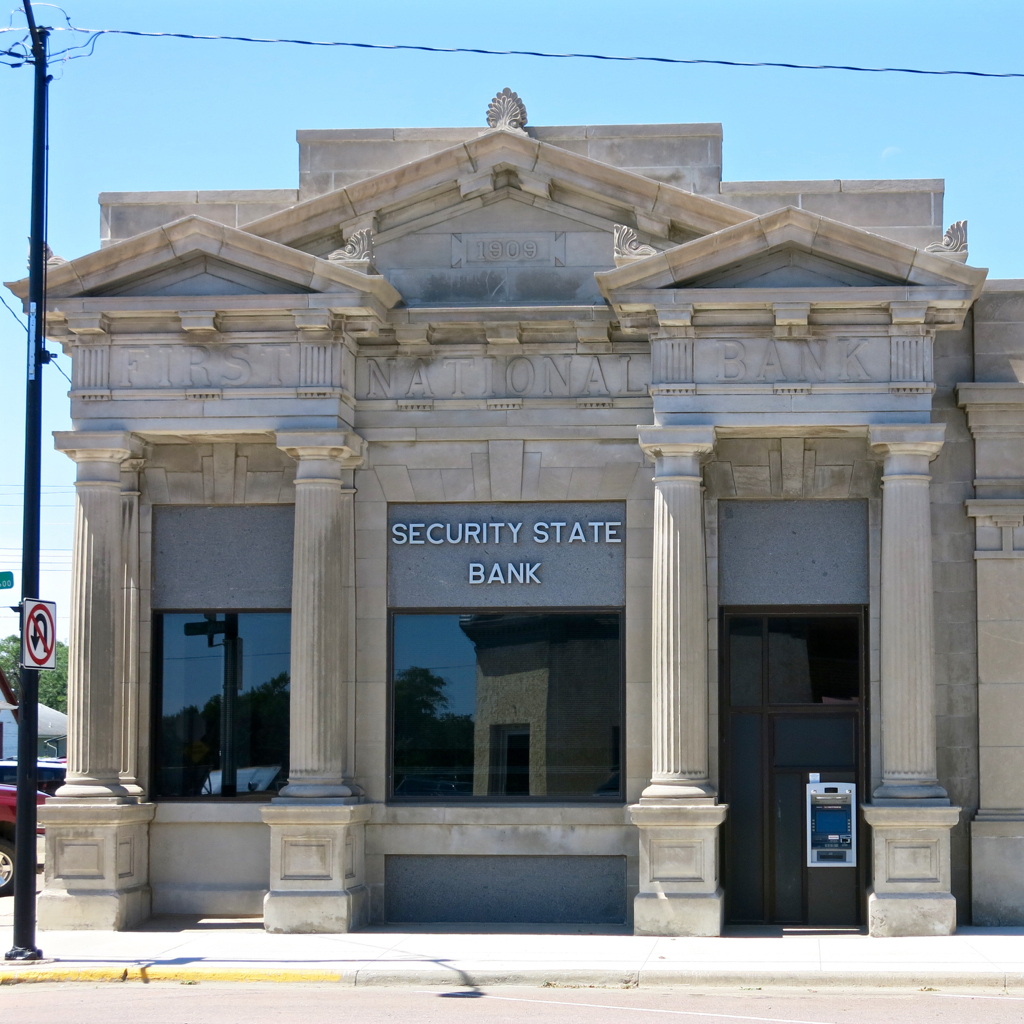 We got back on the interstate, and at a rest area near White Lake, S.D., we saw a curious sight: a tiny church separated from the rest area by a low chain link fence, but with a gate. 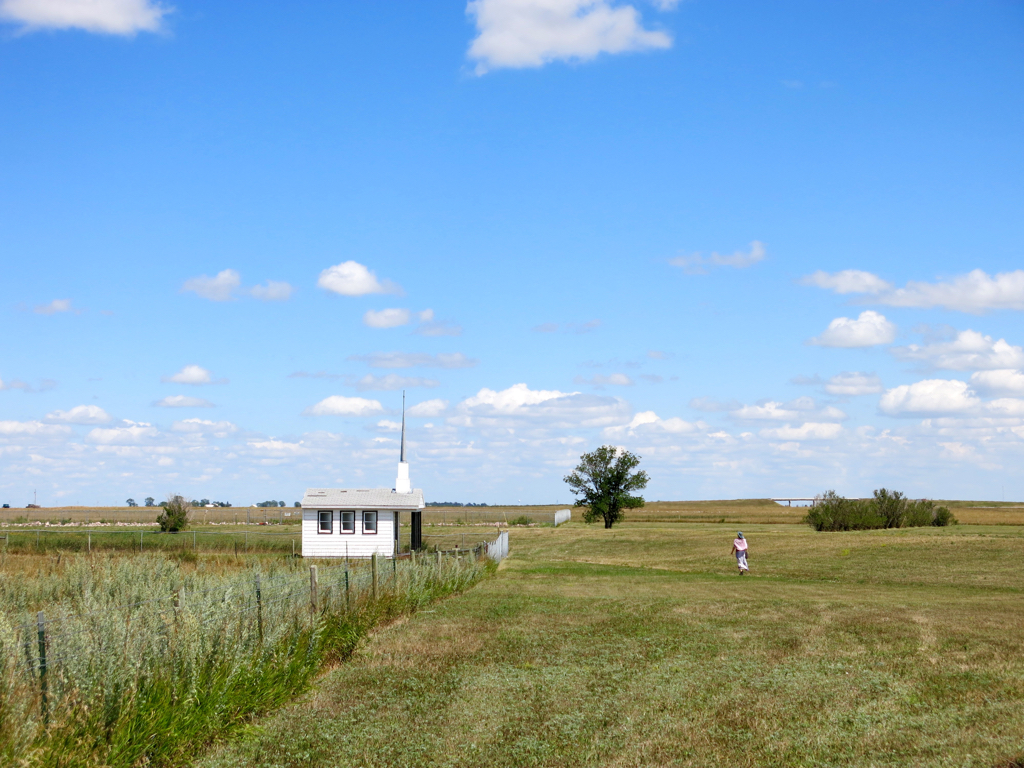 We went inside and found three rows of small benches, with an aisle between the benches. The windows were sealed shut so it was stuffy, but I noticed that there was a thermostat and a small radiator so presumably the building is heated. At the back of the church was a rack containing a variety of tracts about the Bible; I wished I had brought along some extra copies of the “Unitarian Universalist Views of the Bible” pamphlet to add to the rack.

We’re spending the night here in Murdo, South Dakota. Just after we arrived, it started raining. We ducked into The Diner, which was attached to the Pioneer Auto Museum and gift shop. It was still raining when we finished eating, so we went into the gift shop. Carol managed to get a reduced admission rate to the Museum, because it was near closing time. I stayed in the gift shop, where they had a small but excellent selection of books on local history; I bought a biography of Oscar Micheaux, an African American homesteader in Dakota Territory who also happened to be a filmmaker.

I wound up talking politics with the man who sold me the book. We both agreed that we were disappointed with both parties’ nominees for president. He said that Trump was a bully and Clinton was a crook; I contended that one reason we have gotten to where we are now is the lack of common courtesy in politics and on social media; in short, we said nothing that hasn’t already been said over and over again in casual conversations throughout the United States.

That man had to help another customer, so while I waited for Carol to come out of the museum, I talked with the man who sold admission to the museum. He had worked for years in local law enforcement. He told me about several of his encounters with mentally ill people, and contended that mentally ill persons would be better served by some kind of institutions, rather than dumping them on the streets where they forget to take their medications and become the responsibility of law enforcement personnel.

At last Carol came out of the museum, just before it closed. She told me it was really something and that I should have gone in with her, but I was satisfied with the conversations I had while I was waiting.