We left Alexandria and drove up to Washington, D.C., in time to have lunch with my old friend Rabbi Michael and his wife Lawyer Julie.

Michael and I hadn’t seen each other in almost a decade, and now his children are no longer children; two of them are older than I was when I met Michael. I was in the first few weeks of college, feeling a little bit adrift, when the fellow in front of me in the dinner line started talking to me about science fiction. Next thing I knew, he got me to go to Washington, D.C., to participate in a political rally in support of the Equal Rights Amendment (ERA) on the law of the Capitol building. That was my first trip to Washington, as well as the furthest south and the furthest west I’d ever been in my life. I guess it is not entirely surprising that two geeky, politically committed teenagers wound up as middle-aged progressive clergy committed to peace and social justice. 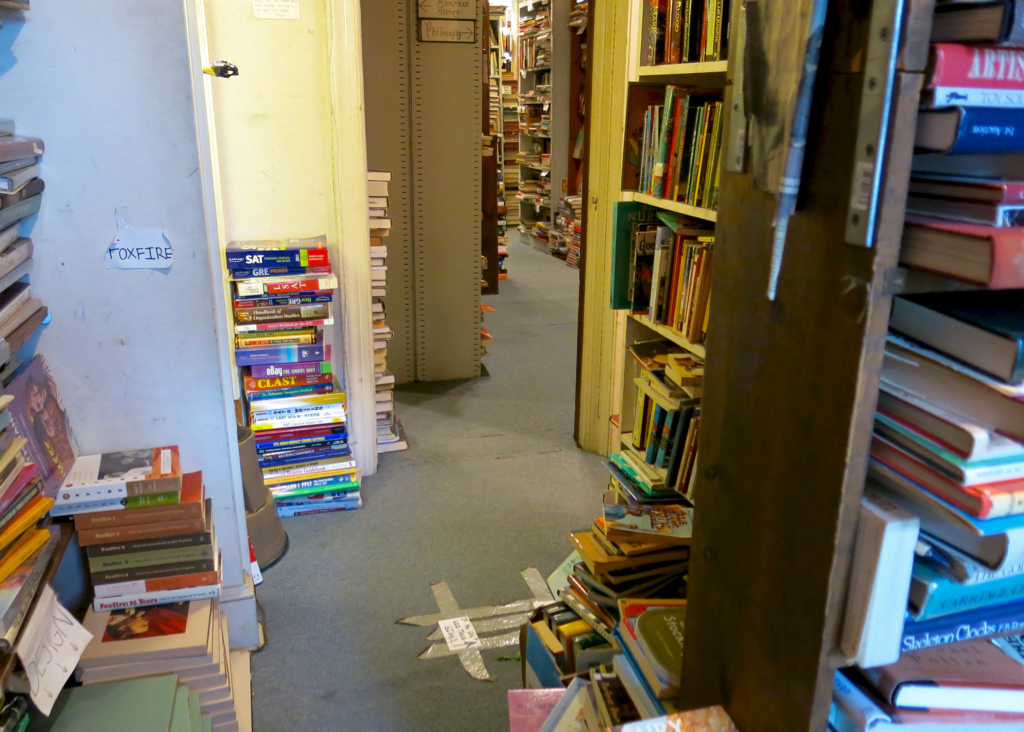 After lunch, Carol and I wandered over to the Capitol Hill Bookstore, a maze of books on shelves and books in stacks on the floor. The woman sitting at the front desk was listening to audio of the Congressional hearings on gun control. After dinner, my friend E took us over to East City Bookshop, a new bookstore near Capitol Hill. E pointed out the substantial number of books on politics and political figures, and said something to the effect that you’re just going to find more politics in a D.C. bookstore.

Carol and I went for a walk this morning while it was still relatively cool (that is, under ninety degrees). We came across this “Little Library” — not an official Little Free Library, or at least it is not listed on the official Web site — which Carol wanted to examine more closely because it has a green roof. 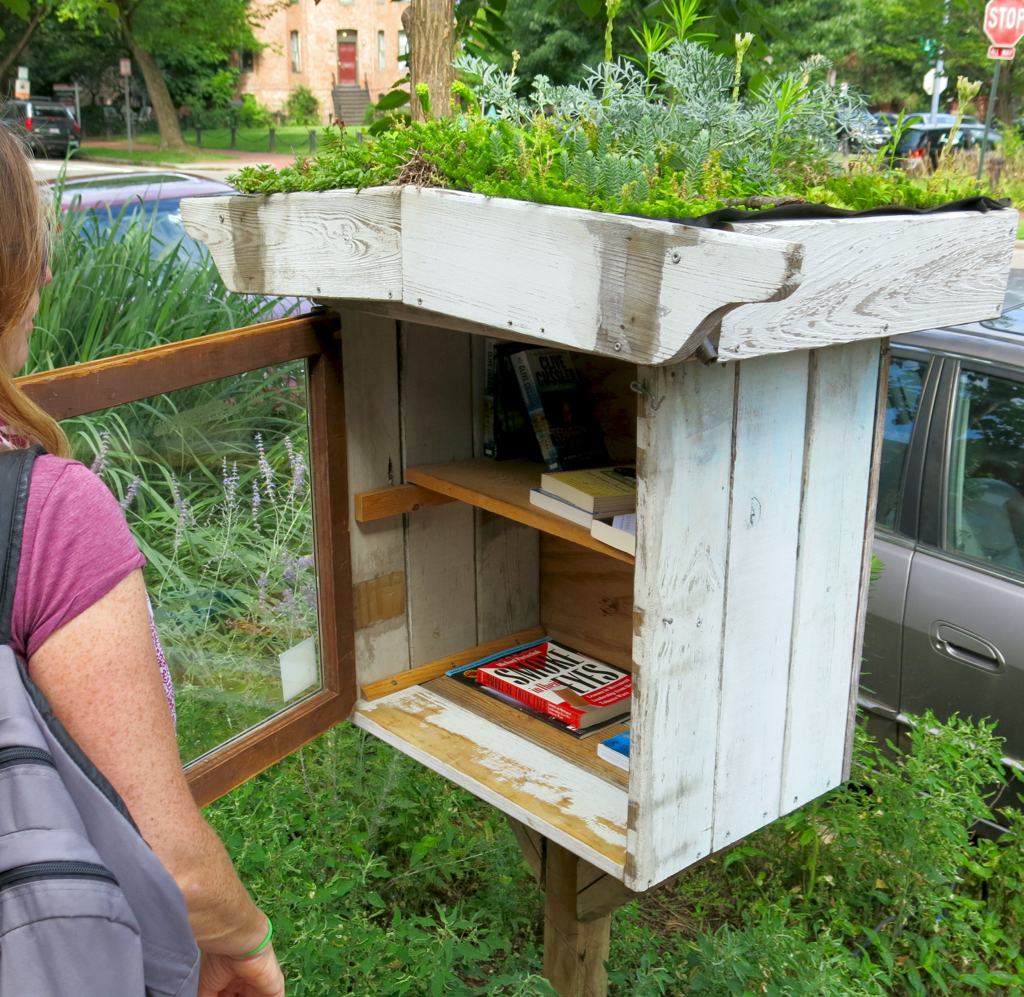 We walked as far as the Capitol building, where a political rally was in progress. About 75 people in bright orange t-shirts stood on the rear steps of the Capitol building in the hot sun. Perhaps a hundred people stood directly in front of them in the hot sun, and another couple of hundred stood further back in the shade. We could hear the amplified voice of a woman telling about how her son was permanently disabled by stray gunfire. Several of the people in the shade held signs that said “Disarm Hate.”

I am glad that we still have the right to freely assemble in the United States — more or less, with significant restrictions on public assemblies, and generally with a significant police presence. But I’ve changed my mind about protest politics since the days I protested on the lawn of the Capitol building for the Equal Rights Amendment; protest politics is easier and more exciting than face-to-face door-to-door political organizing, but I now believe protest politics simply polarizes opposition while it’s the face-to-face one-on-one conversations that actually work best. 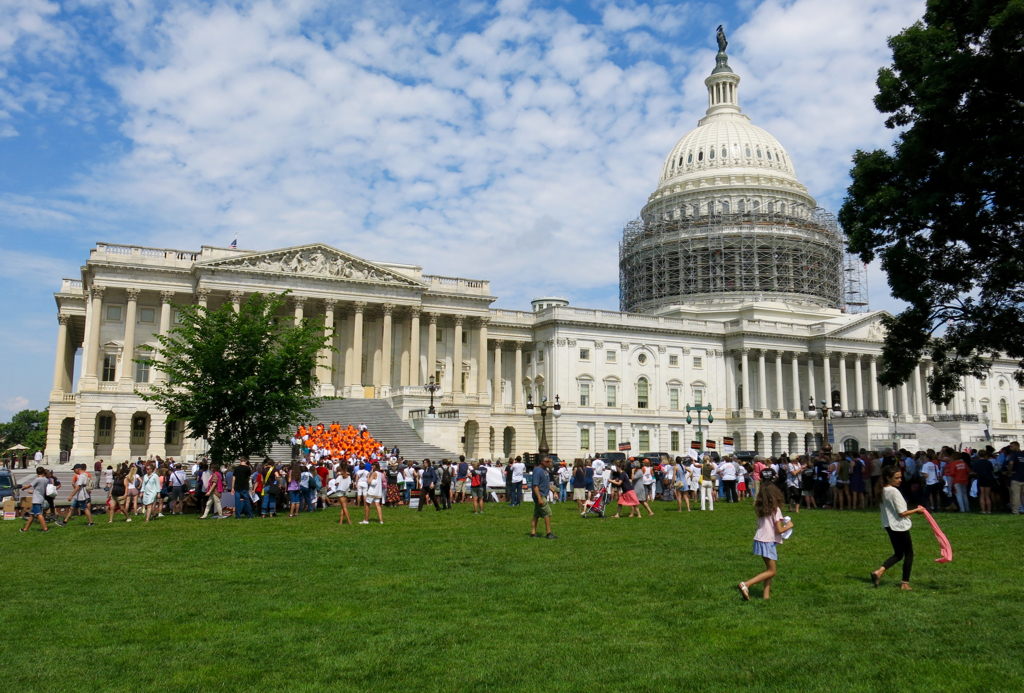 From a pragmatic standpoint, I suppose protest politics might work, a little, if you can get some media coverage. Carol and I saw several young protestors, dressed in bright pink shirts and signs, talking with a television news cameraman; their signs read “Ban Assault Weapons Now.” Perhaps they will get a five-second slot on the evening TV news. Perhaps someone will watch that five seconds on TV, and change their mind about gun control. But I doubt it…. 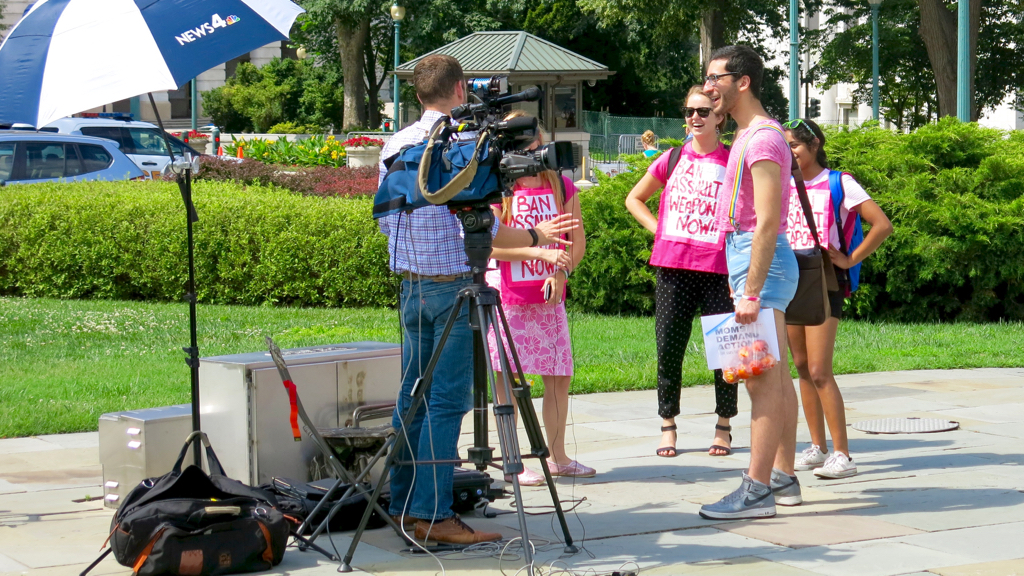 One thought on “Alexandria, Va., to Washington, D.C.”