When you drive across the country, what you remember are the eye-catching parts of the landscape through which you have traveled. You focus your vision on what turns out to be a tiny portion of what you can actually see. When you look at that bright red tractor on the tractor-trailer rig going the other way on the highway, it looms large in your vision; you ignore the junk piled down by your feet, the driver sitting next to you, the landscape rushing by the window to your right, the road rushing towards you in front of you.

When you are in the car, you hear very little of the landscape through which you are passing. Instead, you hear the rush of sound made by your own car, and perhaps sound from the cars that pass you; you hear the recorded music that plays through your car’s speakers, Louis Armstrong singing about missing New Orleans, or eighteen musicians playing music by Steve Reich. You do not hear the cicadas whirring, the birds singing in the marshes along the river, the wind whispering through the trees.

And when you are driving, you don’t exert your muscles, although your muscles start to ache, because you have to hold them in the same position for long periods of time. If you think about it, driving on interstate highways is slightly surreal: you drive along in a dream bubble, not really seeing what is around you, not hearing, not smelling, not feeling the temperature of the air. In this surreality lies part of the power of Vladimir Nabokov’s Lolita: Humbert Humbert becomes unmoored from moral reality, drifting in a dream world of highways and sex.

We saw signs advertising gasoline for less than two dollars a gallon; adjusting for inflation, this is about what gasoline cost in 1966, and since our car gets nearly forty miles to the gallon, it is cheaper for us to cross the country now than it would have been in 1966. This is surreal, particularly when you recollect that in this presidential election season so many of the politicians tell us that life is so much worse now than it was back in some Golden Age of the past; and what the politicians say is both true and not true, which only increases the surreality.

But as the sun got higher, these dark thoughts occupied me less and less.

We stopped at Rowe Audubon Sanctuary near Gibbon, Nebraska, and walked through the fields near the Platte River. A large cloud was blocking the sun when we arrived, and with a gentle easterly breeze it was a perfect summer day: warm, but not too hot. 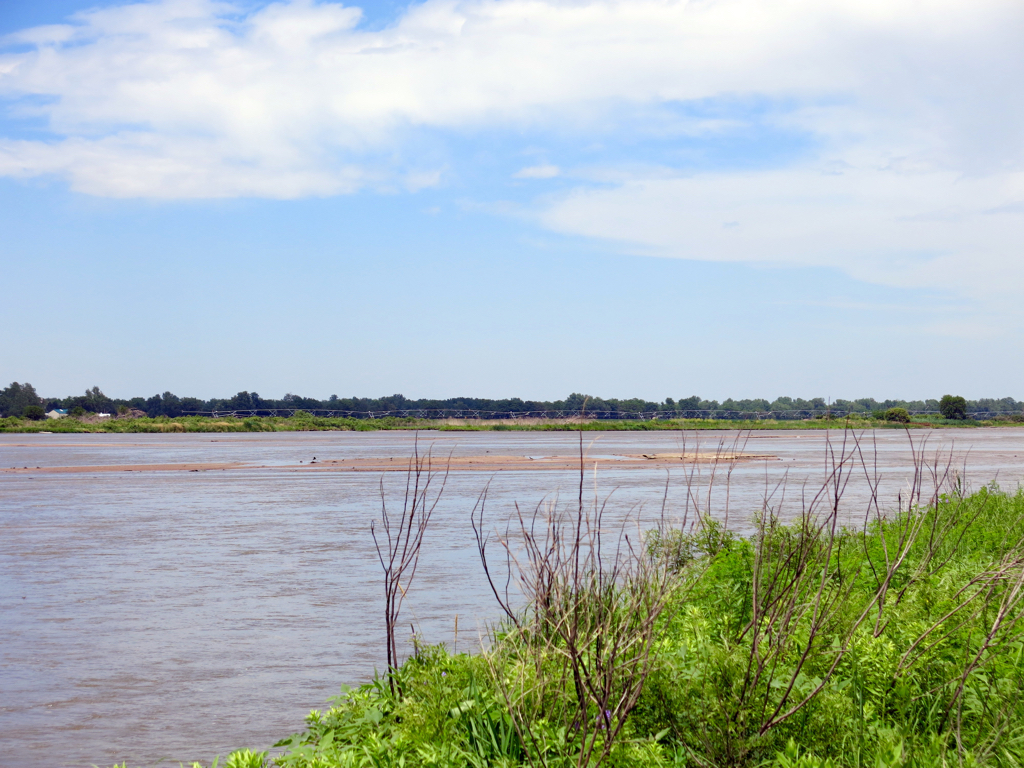 I told Carol to go on ahead because she wanted to walk, and I wanted to look at birds. Soon she was out of my sight. I listened to dozens of Dickcissels singing their funny buzzing song in the tall grass around me. Red-winged Blackbirds flew back and forth across the path, growing noisy and worried when I walked too close to their nests. Northern Bobwhites called in the distance, and once one flew out of the brush near me and across the meadow, short little wings carrying its tubby body to safety. One rabbit scurried down the path in one direction, and two more flushed out of the brush where they had been relaxing and scurried off in the other direction.

The cloud drifted away and the hot sun beat down on my head. The breeze died away. The blue sky opened up above me. Even though it had grown hot, even though I kept sneezing from something that was in bloom, it was a perfect summer day. 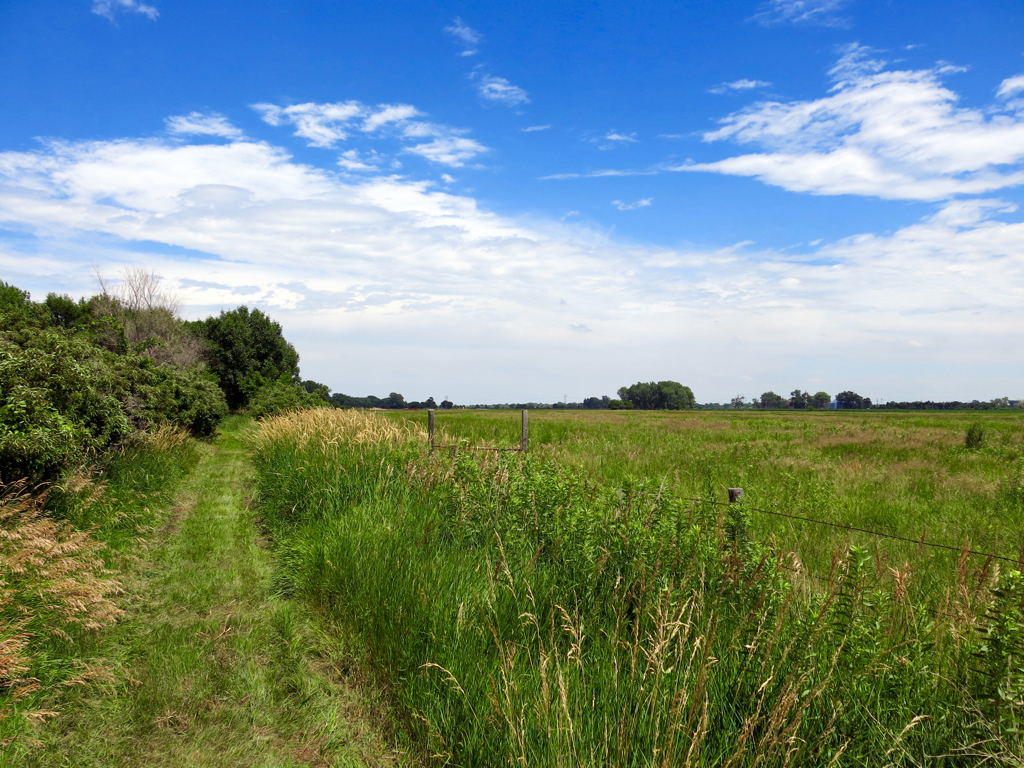 We left the Audubon sanctuary, and I took a nap while Carol drove through the afternoon and into the evening. We got off the interstate and drove down a two-lane highway into Avoca, Iowa, driving between fields of soybeans and fields of corn. On the way into town, we passed Titan Machinery of Avoca, and admired their Case agricultural equipment, glowing deep red in the fading sunlight. I especially admired the dozen or so combines with cornheads mounted on them, all lined up along the edge of the street. 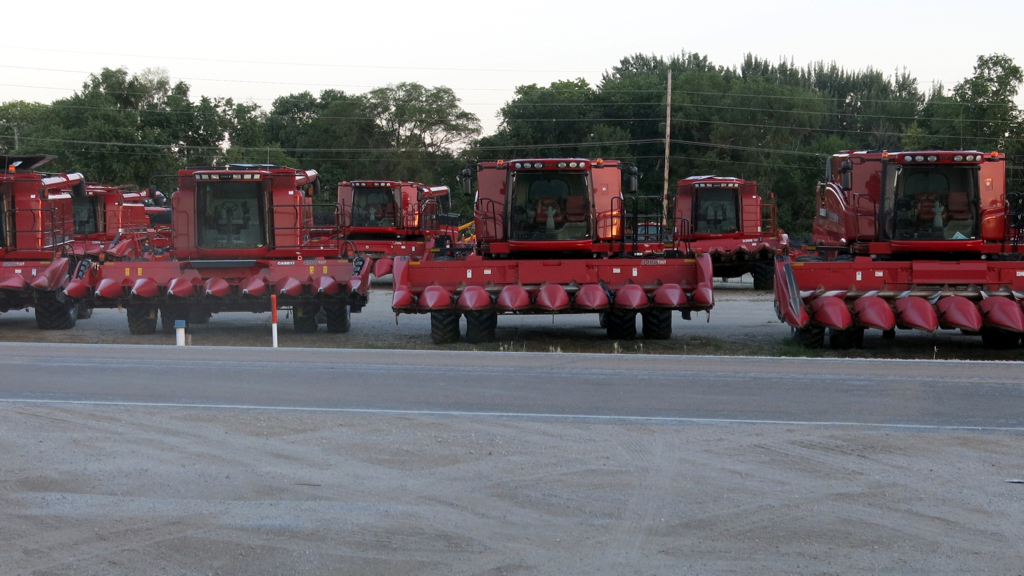 I ordered a ribeye steak at the Old Main Street Grill, while Carol ordered a salad. I felt guilty for eating beef because all my liberal friends tell me how bad it is for the environment, but the ribeye steak was inexpensive, perhaps raised in neighboring Nebraska; Carol’s salad was mostly shredded iceberg lettuce, doubtless shipped a thousand miles from where it was grown in California and perhaps harvested by undocumented immigrants. And which is better, monoculture fields of corn and soybeans, much of which will be heavily processed before it is eaten, or even not eaten at all; or range lands devoted to beef cattle? Moral equations are never as simple as I would like them to be. One thing I know for sure: farm work may be deeply rooted in reality, but is is brutally hard — hot, exhausting, hard on the body and the mind — and I’d just as soon not so it myself, not even on a picturesque organic farm.