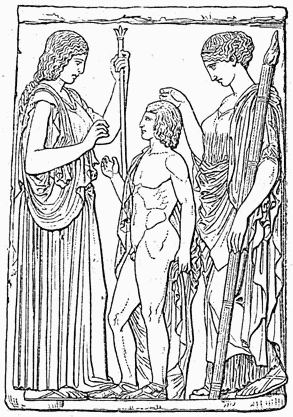 Above: Demeter, Triptolemus, and Persephone (l-r) celebrating the Eleusinian Mysteries. Demeter hands Triptolemus the sheaves of wheat, while Persephone blesses them. A 19th century drawing of a marble relief from 5th C. B.C.E.

Triptolemus rode high in the sky, driving the chariot through all of Europe in into the realms of Asia. At last he came to the land of Scythia, where King Lynchus ruled. He landed the chariot, and entered the king’s palace.

“What is your name and where are you from?” said King Lynchus. “How did you get here, and what brings you to Scythia?”

“I am from Athens, that famous country,” said Triptolemus. “My name is Triptolemus. No boat brought me by sea, nor did I come on foot by land. I came via the sky, which lay wide to give me way. I bring the gifts of the goddess Demeter.” Triptolemus held out seeds of wheat to show to King Lynchus. “If you sow these wide over your farm lands, they will give you back bountiful harvests, gentle nourishment.”

When he heard this story, the uncivilized King Lynchus was jealous of Triptolemus. The King wanted to gain the glory of bringing the gift of wheat. He offered Triptolemus great quantities of food and drink, and soon his guest had eaten and drunk so much that he fell fast alseep.

When King Lynchus was certain that Triptolemus was fast asleep, he went to get a dagger. He attacked his guest with the dagger, intending to kill him on the spot. But as he tried to stab Triptolemus, Demeter transformed the king into a lynx.2

When he was done with his task, Triptolemus flew home again to Eleusis. And there he lived, gaining a reputation as a fair and just man. When at last he died, he became one of the judges in the underworld, along with three others who were just and wise in their lifetimes, Minos and Rhadymanthys and Aeacus.3 In his lifetime, Triptolemus brought the life-giving gift of agriculture to humankind, which allowed them to become something more than animals. In his death, as a judge in the underworld, he provides sweeter hopes to the dead, regarding the end of life and all eternity.4

No one extant myth tells the whole story of Triptolemus, so this version of the Triptolemus story draws from three different ancient sources, and one modern interpretation: