Some years ago, I started working on a version of the story of Demeter and Persephone. I put part one of the story on this blog back in 2012; now, finally, here’s part two. No promises when part three will be done.

Demeter’s heart was sad at the loss of her daughter, and she was angry at Zeus and Hades. In her sadness and anger, she wandered across the land, until at least she came to the house of wise King Celeus, ruler of the beautiful city of Eleusis.

Demeter sat down to rest on the wayside by the road, in a shady place beneath an olive tree, next to the Maiden Well, from which the women of Eleusis came to get water. She looked like a woman who was too old to bear children, the kind of respectable older woman who might care for the children of a king, or perhaps like one of the housekeepers who clean the echoing halls of a king’s palace.

The four daughters of King Celeus came to Maiden Well with their bronze pitchers, to draw water and carry it to their father’s house. Their names were Callidice, Cleisidice, Demo, and Callithoe who was the eldest of them all. They looked like goddesses in the flower of their girlhood. They saw Demeter sitting there in the shade of the olive tree, but they did not know that she was a goddess — when gods and goddesses roam the earth, it is never easy for mortals to recognize them — and so they spoke to her.

“Old mother,” they said to her, “where do you come from, and what people do you come from? Why have you gone away from the city, and why do you stay away from houses? In many of the shady halls of the houses of our city, there are women of just such age as you, and they would welcome you there.”

Demeter, seeing that the girls were polite, answered them politely. “Hail, dear children,” she said, “whosoever you are. I will tell you my story; for it is right that I should tell you truly what you ask. Here is my story:

“Doso is my name, the name my stately mother gave to me. I have come from the island of Crete, sailing over the wide back of the sea. But I did not come willingly.

“Pirates took me from Crete by force of strength. After they had stolen me away, they took me in their swift ship to the city of Thoricus. There the pirates, both men and women, went on shore, and began to prepare a meal next to the ropes that tied the stern of the ship to the shore. But I did not want their pleasant food. I escaped my new masters, and fled across the dark countryside, so that the pirates could not take me somewhere across the sea and sell me as a slave.

“Since my escape, I have wandered, and at last came here. I do not know what land this is, or what people are in it.

“May the gods and goddesses who dwell on Mount Olympus give you good husbands, and the kind of children that parents desire. Take pity on me, maidens. Show me, dear children, to the house of a man and woman where I may go and work cheerfully for them at such tasks belong to a woman of my age. I could take good care of a newborn child, cradling the child in my arms. I could keep house very well, and make up the bed of my master and mistress, or teach the other women their work.”

“Dear Doso, how terrible to be kidnapped by pirates!” Callidice said. “The gods and goddesses are stronger than us, and we must bear whatever they send us — even being stolen away by pirates — even though we suffer.”

The other girls nodded in agreement.

“But why don’t you stay with us, in our parents’ house?” Callicice continued. “We will go home and tell Metaneira, our mother, all about you. Our mother has baby boy, our younger brother, who is being nursed in our well-built house, a child we have all welcomed. If you could care for him until he reached the full measure of youth, we know our mother would give you such gifts that any woman would envy you.”

Demeter — or Doso, as she now called herself — bowed her head and agreed to this offer.

The four girls filled their bronze pitchers with water, and joyfully hurried back to the house. As soon as the got there, they went straight to their mother and told her Doso’s story. Metaneira told the girls to hurry back with all speed and invite the stranger to come. Like young deer bounding across a meadow in springtime, the girls held up the folds of their garments and darted down the path, their hair streaming around their shoulders.

They found Doso still seated in the wayside, and told her to come with them to their home. Doso followed them home, still sad at heart, with her head veiled, and her long dark cloak waving about her slender feet. 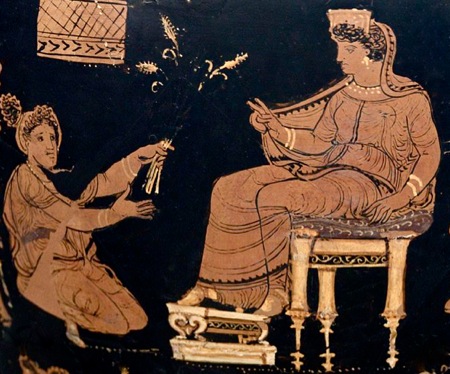 Above: Metaneira, from an old Greek vase.

The girls ran in through the portico to where Metaneira sat next to a pillar, holding her baby son to her breast. But when Doso reached the threshold, she looked for a moment like the goddess she really was, and her head reached the roof and she filled the doorway with a heavenly radiance.

Metaneira saw this, and awe and reverence and pale fear took hold of her. She rose up from her couch, and asked Doso to be seated there beside her. But Doso, still acting the part of an older woman, would not sit upon the couch, for no homeless woman would sit as an equal with the wife of a king. Doso stood silently, with her eyes cast down, until at last careful Iambe placed a low stool for her, so she could be at a lower level than Metaneira. Only then would Doso sit down.

Doso held her veil in her hands before her face. She sat without speaking for a long time on the low stool, neither smiling, nor taking the food nor drink they offered her. Beneath her disguise, Demeter was still pining for her daughter Persephone.

But after a time, gentle Iambe touched Doso’s heart with funny sayings and jests. At last, Doso smiled and laughed, and her heart was cheered. Metaneira filled a cup with sweet wine and offered it to Doso. But Doso refused it, for she said it was not lawful for her to drink red wine, and she asked them to mix meal and water with soft mint and give her to drink. Metaneira mixed the drink and gave it to the goddess as she bade. And the great goddess Demeter, still in her guise as Doso, took the drink — and this later became one of the most important rituals in the temple that was built for Demeter in Eleusis.

“Hail, lady!” said Metaneira. “I greet you as lady, for even though you come to us looking like a woman who is homeless and poor, I think you are nobly born. Truly dignity and grace are conspicuous upon your eyes as in the eyes of kings that deal justice. Yet somehow you were stolen away by pirates. We mortals must bear whatever the gods and goddesses send us, even when it brings us grief.

“But now,” Metaneira said, “since you are come here, you shall have what I can bestow. Will you take care of this baby? My husband and I were very glad to have him, for I thought I was too old to have any more children. If you should bring him up until he is grown, I will give you great rewards.”

And so it was that Demeter, in her disguise as the old woman Doso, came to live in the house of Metaneira and King Celeus. But it would not be long before Metaneira accused her of trying to kill the little baby boy….

One thought on “How Doso came to live with Metaneira”