The smoke cloud that’s covering most of California is so thick overhead right now that it looks like deep dusk. We have to turn on the lights in our house, as if it’s almost night. Drivers have to turn on the headlights of their cars. The temperature is stuck at 63 degrees, because there’s no solar warming going on.

At least the air quality here along the coast is tolerable, due to the marine layer keeping the worst of the smoke aloft.

Today, the owner of the goats came to pick them up. He and his helper backed the goat trailer up to where the goats were penned in. While the humans were dismantling the electric fence, they let the goats munch on a few last weeds. The herd dog stayed in the goat trailer, waiting until he might be needed.

But the goats, being goats, wanted more to eat. The electricity had been turned off in the fence, and the goats found a small opening they could sneak out of. Carol looked up from her laptop and suddenly saw a couple of goats in the small cemetery parking lot. We went out to see what we could do, but the goats paid no attention to us. Then more goats came out. Pretty soon, all the goats were out. Carol called the cemetery superintendent so the superintendent could call the goatherds on their cell phones. By now, the goats were moving in a bunch across the cemetery, cropping grass as they went.

Soon one of their humans showed up, and he got the herd dog. Between the two of them, the human and the dog got the goats moving back towards the trailer. The goats would try to break away — all that lovely grass, just waiting for them! — but the dog would run quick as lightning and head them off, with his human partner cutting off any chance of retreat. At last the goats broke into a trot and ran towards the trailer.

Carol watched the action from inside the cemetery, while I and one of the cemetery gardeners stood in the parking lot, both to try to keep the goats from escaping into the streets of San Mateo, and to make sure any visitors who drove in didn’t run over a goat. We weren’t really needed, though; the herd dog and his human quickly had the goats under control.

Soon enough, all the goats were back in a fenced-in area, ready to be loaded in their trailer. Carol and I went back inside, and opened up our laptops. It didn’t last long, but the goats’ breakout provided a dramatic finale to their stay at the cemetery.

Abby asked me to post more photos of the goats. Here are two portraits:

St. John’s Cemetery, where we live, owns a strip of land between the actual cemetery and an adjacent residential neighborhood. This strip of land, while attractive, has gotten overgrown with undesirable plants like Russian thistle and poison oak. As an environmentally friendly way to control these undesirable plants, Kathy, the cemetery director, brought in Green Goat Landscapers.

The goats arrived this afternoon, and I went out to look at them this evening. They are safely installed behind a temporary electric fence — the fence not only keeps the goats in, it also keeps any roaming mountains lions out (and yes, mountain lions have been seen in the cemetery).

I found it very satisfying to stand and watch the goats. Perhaps I had distant ancestors from Eurasia who herded animals, and I still have some ancestral memory of that. More likely, it’s just that herd animals and humans spent a lot of time with each other, and while we humans domesticated goats, the goats for their part also domesticated us.

Eventually computers will domesticate us in different ways, but at the moment we humans are still closer to goats than to computers. I stood watching the goats eat the thistles. They didn’t seem to mind the prickles on the thistles; their facial expressions showed no signs of pain; only contentment.

I stood watching the goats for quite a while, and had a brief fantasy about being a goatherd. But goatherding is even less remunerative than being a children and youth minister, so I went indoors to check email.

It’s that time of year: the Odorous House Ants (Tapinoma sessile) are sneaking indoors to get out of the rain. At least I think that’s what they are: they’re the right size and shape, and when you crush one it smells vaguely floral (some people describe the smell as being like cocnout sun tan oil). One of the ants paused on the edge of our sink long enough for me to take a photo that’s only slightly blurred:

More about Odorous House Ants from Dr. Eleanor’s Book of Common Ants, on the School of Ants Web site.

At about 5:30, while wandering around St. John’s Cemetery enjoying the first warm spring day, I saw a number of California Tortoiseshell butterflies flying under some live oaks. I tried to count them but they were moving too fast: at least half a dozen, probably more. They were very active, but some of them settled long enough for me to take their photo. I noticed that the edges of their wings were quite worn.

California Tortoiseshells are migratory butterflies. They hibernate in winter in the foothills of the Coast Range — St. John’s Cemetery could be considered in the foothills of the northern end of the Santa Cruz Mountains . According to Arthur M. Shapiro in Field Guide to Butterflies of the San Francisco Bay and Sacramento Valley Regions: “When they emerge from hibernation in late winter the males are late-afternoon territorial perchers in classic nymphaline style.” Indeed, the butterflies I saw appeared to be patrolling territories, perching in one spot and periodically circling around a small area, sometimes flying at other butterflies in nearby territories.

I went back to the house to get a camera with a better zoom, but by the time I had returned, the sun was almost below the horizon and the butterflies had gone away.

Several of the live oak trees in the older part of St. John’s Cemetery in San Mateo have branches on which grow bluish-gray foliose lichens with ruffled edges lined with black cilia. The thallus appears to be attached to the substrate mostly in the middle, leaving the edges curling up. On some, small round soralia could be seen (a soralium is where a lichen produces soredia, which are small bits of fungal hyphae and phtyobiont that can be released to produce a new lichen). 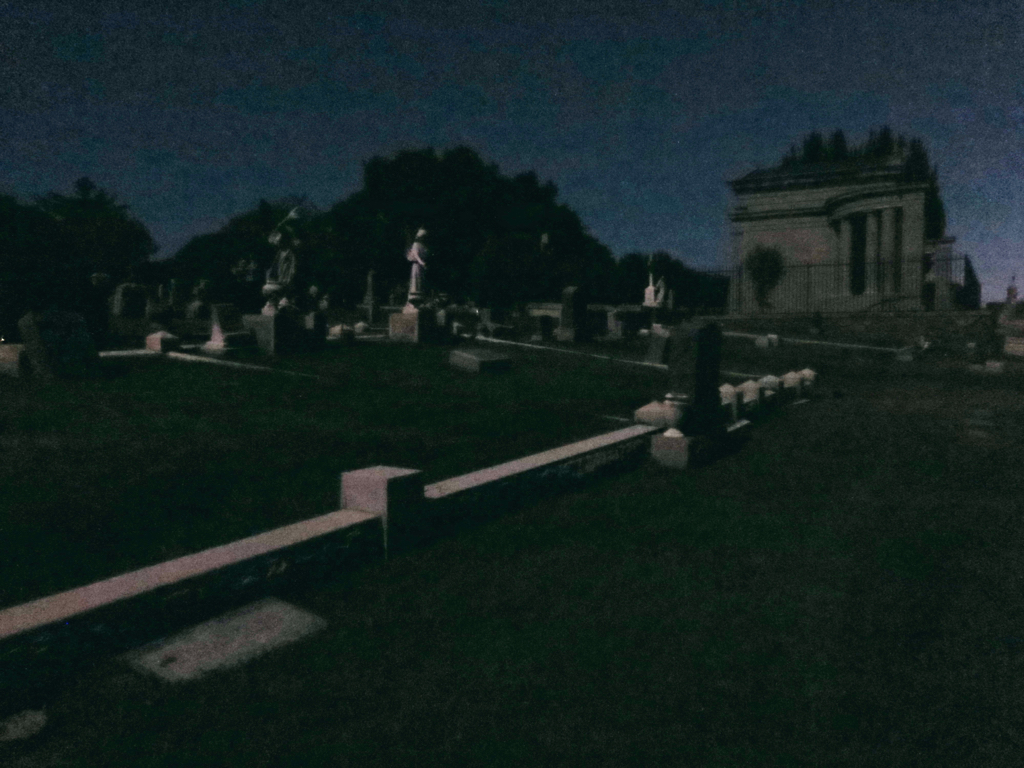 One of the nice things about living in the old caretaker’s house in St. John’s Cemetery is being able to be in the cemetery after hours. It’s a lovely place on a night like tonight, the night before the full moon: peaceful, with a feeling of quiet transcendence. You feel a quiet connection with all those people who were buried here, and with the people who loved them and wanted a calm place to remember them.

Just as I finished taking this photo, Carol said, “Watch out!” I turned around in time to see a skunk walk past, its tail raised in warning. We retreated back into the house, leaving the cemetery to the moonlight. 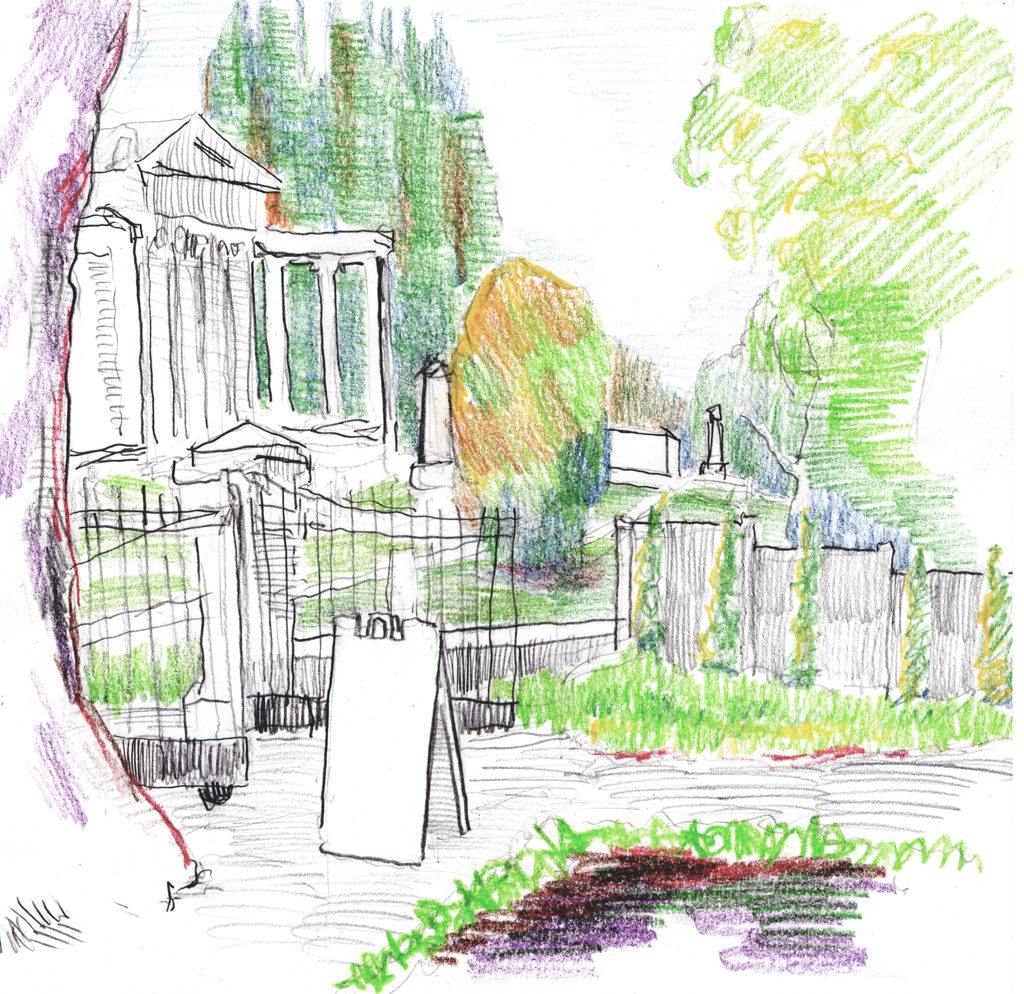 Living in a cemetery gives me the opportunity to observe a nice diversity of lichens. I went out this evening to see some of this diversity; my camera served in stead of a hand lens. 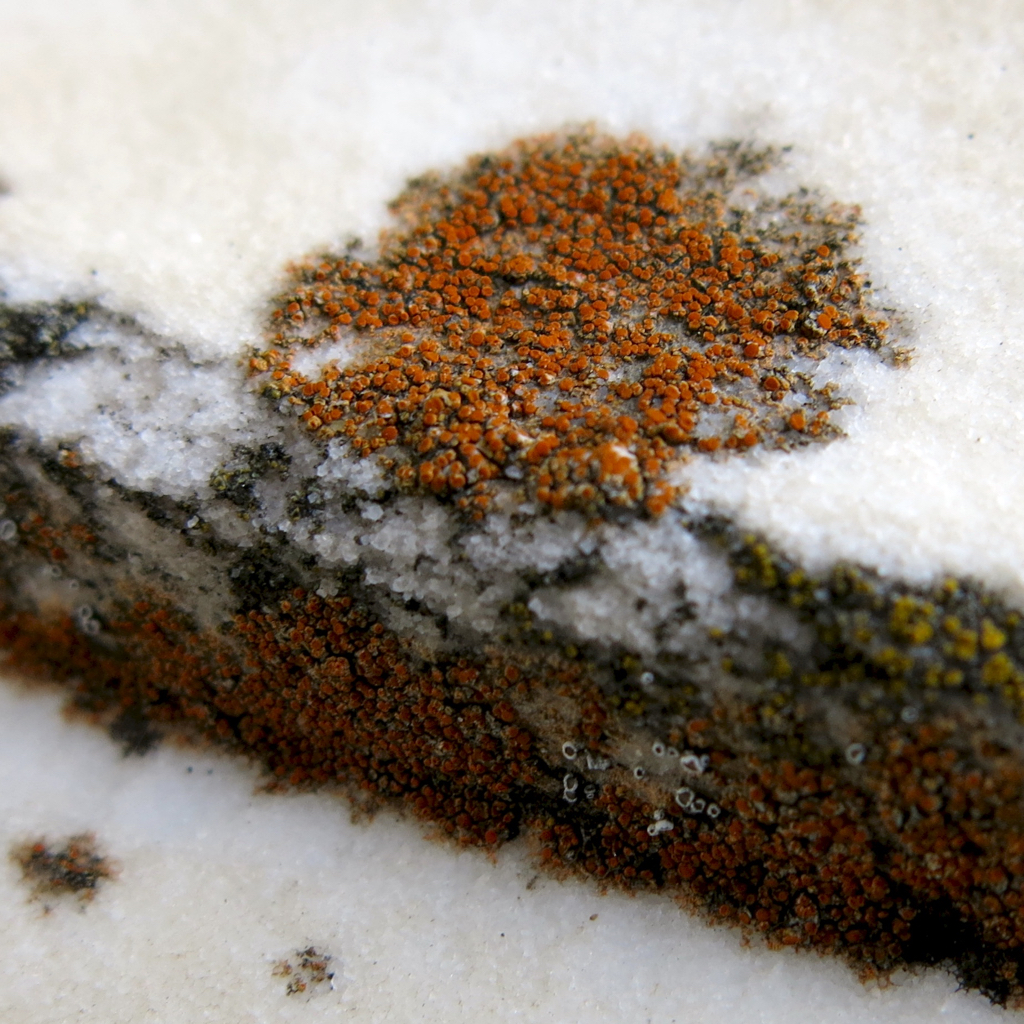 This crustose lichen, covering an area about the size of a quarter, was growing on a marble gravestone. The magnification of the photo shows how the lichen has etched an indentation into the stone. To make an accurate identification of crustose lichens, I’d need both a microscope and far more knowledge than I currently have. But this may be in the genus Caloplaca: “The 25 to 30 species [of Caloplaca] reported from California … occur very widely on trees and mostly calcareous rocks. Caloplaca saxicola is common and one of the first crustose lichens collected by beginners” (Mason E. Hale Jr. and Mariette Cole, Lichens of California [Berkeley: Univ. of Calif. Press, 1988], p. 190). 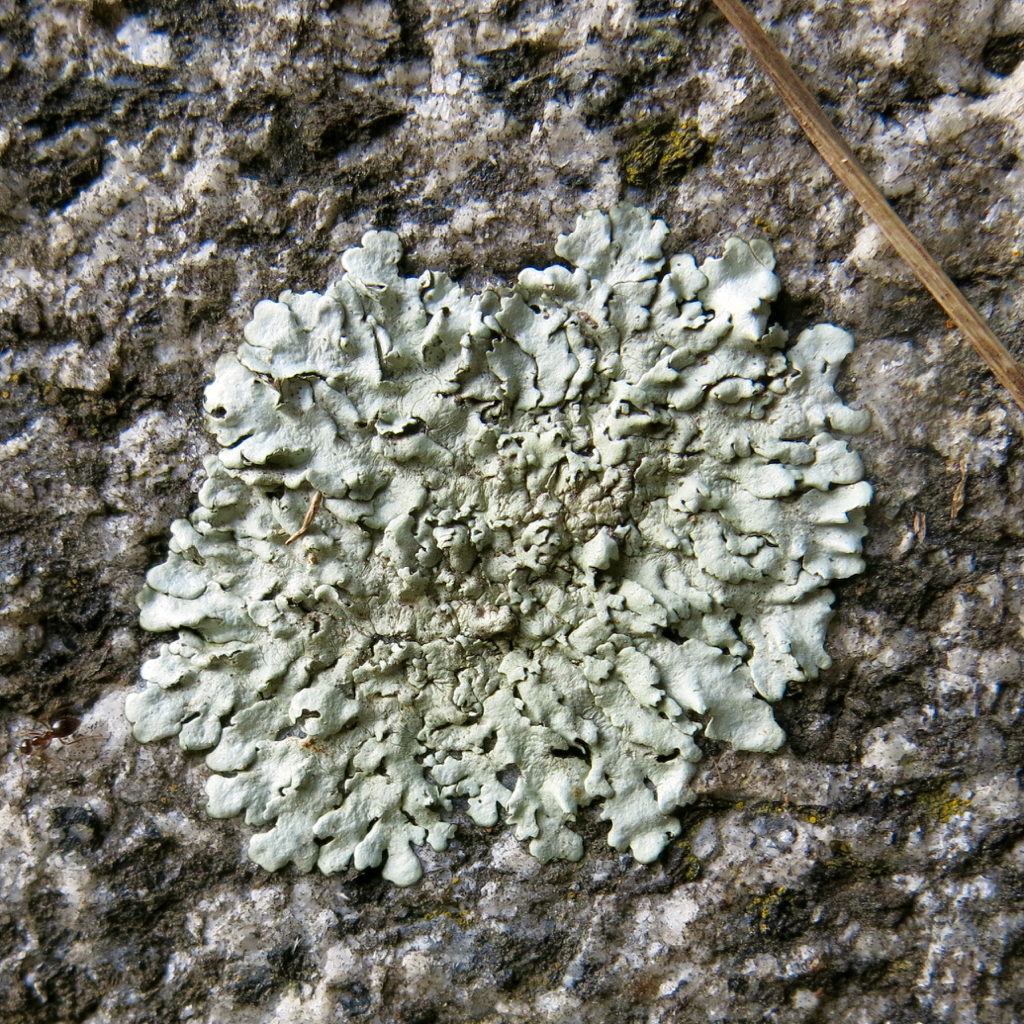 The foliose lichen above, about an inch across, and found on a piece of granite, may be in the genus Xanthoparmelia. According to Hale and Cole, “Xanthoparmelia is by far the dominant foliose lichen on granites, schists, shale, and other non-calcareous rocks throughout California…. Two species, X. cumberlandia and X. mexicana, are common and collected almost everywhere in the state.”

If I were to get serious about identifying lichens, I’d need to go out and get the K, C, and P reagents, an inexpensive USB microscope, and a few other things. Then I’d have to get serious about studying them: dissecting them, looking at them under the microscope, etc. Is it enough to just look at lichens without identifying them? or do I want to engage in more serious study of them? Heraclitus advised that “those who are lovers of wisdom must be inquirers into many things indeed” (DK35); but how deeply should one inquire into each of those many things? One only has so much time in this world; a serious in-depth study of one topic means less time to inquire into the many other things.