The errands and chores took up most of the day, and everything took more time than usual due to the traffic which got increasingly worse as the day went on, as the winter storm warnings for Wednesday grew more dire. Get your Thanksgiving shopping done today! shouted the news media. Begin your Thanksgiving travels now! But in spite of all the traffic, and in spite of the errands and chores I had to do, I did manage to get outdoors.

I got up early and drove to White Pond. I walked to the pond over the bluff on the southeastern shore, and as the pond came into view, the white sand banks stood out through the November gloom, and I was struck by how appropriate its name is. The rainbow trout were rising well within casting distance of the shore, little dimples of water appearing her and there as a fish sucked a fly underwater. But the trout didn’t like anything I cast; there was a hatch of flies going on, and I suspect they were completely absorbed by that; had I been fly fishing, perhaps I could have presented something they would have struck at.

A woman came walking down the shore, and we started chatting. “I haven’t fished here in a dozen years,” I said, “and the houses seem to keep getting bigger.” The houses on the pond started out as modest summer cottages, but now many have them have transmogrified into McMansions. “Oh, it’s terrible,” she said, “they keep expanding them. Some of them are huge now. Three, four floors.” I didn’t say it out loud, but I thought: this is what growing wealth inequality is doing to Concord, Massachusetts: changing it into an enclave of the elite. That thought dampened my mood, so I started fishing again.

After three quarters of an hour, the rainbows stopped rising, and I went off to start my errands. Sadly, I had to spend most of the rest of the day either in the car, or indoors.

But as the day turned towards dusk, I found I had just enough time to go to Great Meadows National Wildlife Refuge and see what birds were there. I arrived too late to see the immature Bald Eagle that has been there for the last couple of days, but I arrived just in time for one of the most spectacular sunsets I have seen in months. 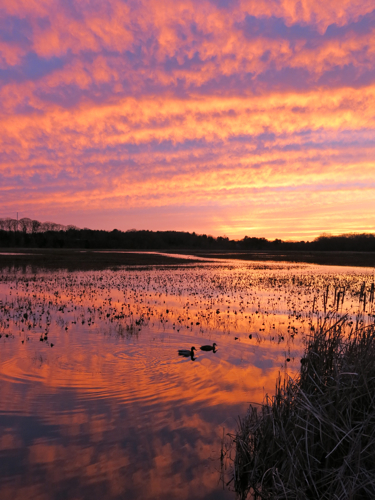 Above: Two Mallards swimming in the upper pool at Great Meadows, Concord, Mass. 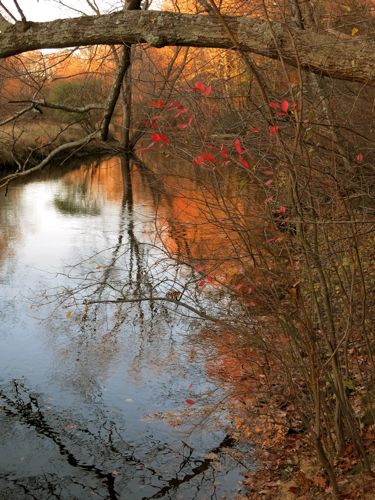 Above: The Assabet River, just below the Pine Street bridge in Concord, Mass., on 15 Nov. 2014

Tonight, my father’s brother Lee, and my cousins Lynn and Steve came up to visit Dad. Uncle Lee spent his career as a chemist, but I would be more likely to call him a practical icthyologist; he knows as much about the biology of fish as anyone else I know; he raises something on the order of a hundred different species of fish in his basement, and he’s an avid fisherman of wide experience. For her part, my cousin Lynn works for MassWildlife as a habitat protection specialist, and has a wide knowledge of many different Massachusetts ecosystems, including rivers, streams, and ponds.

As we were eating our dinner (we had fish, of course), Uncle Lee and Lynn got to talking about fish. Between them, they covered the possible effects of global climate change on lake trout in Canadian lakes; invasive Asian carp in the Midwest; the reintroduction of sturgeon into the Chesapeake River; which species of fish were native in Eastern Massachusetts rivers; etc. Since the Assabet River is visible from Dad’s living room window, of course we talked about the SuAsCo (Sudbury/Assabet/Concord) river system. I tried to participate in the conversation, but it was far more interesting to listen to the two of them. At one point, I looked at Steve and said, “Isn’t it interesting to listen to two fish experts talk?” He agreed. It’s always interesting to hear people talk about something they know well.