Dr. Sharpie takes Possum back in time to 2011, to Oakland, California….

As usual, full script is below the fold.

END_OF_DOCUMENT_TOKEN_TO_BE_REPLACED

Nice blog post by Andrew, a member of the Palo Alto UU congregation, on what Unitarian Universalism needs to do if it’s going to survive. Here’s one quote from his post:

“What sustains me and my religious community? Social justice and egalitarian mores, yes, but the Human Rights Campaign can say the same thing. A large chunk of congregants came from another faith, sometimes a very aggressive and zealous one. There’s a certain fear of religion built into UU communities, even if it’s not admitted….”

So we need to be more than a social justice organization, or a social club. Andrew has lots more to say, and it’s worth reading the whole post. 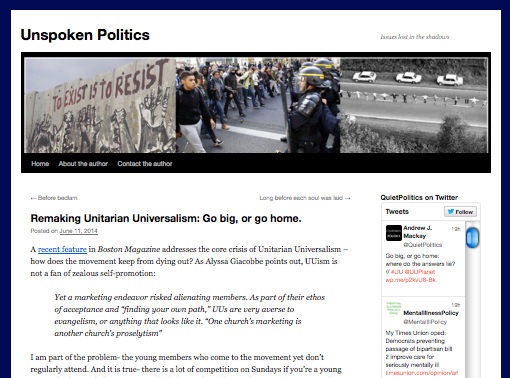 “Oops, I Did It Again,” a song written by Max Martin and Rami Yacoub, has gotten a bad reputation. In an introduction to his own version of the song, Richard Thompson says that unfortunately, the best-known performance of the song was done by “a rather crass pop artist”; yet, Thompson says, the song itself is lovely, with a chord structure “reminiscent of other centuries,” and “if we just take it out of the original hands, and give it a slightly different interpretation, … we can reveal its splendor.” 1”

Oops, They Did It Again

I think they did it again,
They made us believe
That they were our friends.
Oh, baby,
They might think act like they care
But it doesn’t mean
That they’re serious;
‘Cause to make empty promises
That is just what CEOs do.
Oh, baby, baby —

Oops, they did it again,
They played with our hearts,
To them it’s a game.
Oh, baby, baby,
Oops, they cut back our pay,
Took benefits away;
They’re not so innocent! END_OF_DOCUMENT_TOKEN_TO_BE_REPLACED

In the most recent issue of California Northern: A New Regionalism, D. Scot Miller sums up his experience of Occupy Oakland in his essay “The Hungry Got Food, the Homeless Got Shelter: The First Days of Occupy Oakland.” It’s worth tracking down a copy of this magazine just to read Miller’s essay. He gives one of the best summaries yet of what Occupy Oakland was trying to do, written by someone who was there from the beginning:

The hungry got food, and the homeless got shelter. The street kids who smoked and drank at the plaza before Occupy arrived continued to smoke and drink — and now they passed around books from the free library. People were helping each other, looking out for one another, and turning their backs on the stresses of foreclosed homes and benefit cuts. I saw people being radicalized by conversation and generosity….

Carol sent me a link to the Web site for Occupella, a Bay area a capella singing group. Occupella describes themselves as follows:

Occupella organizes informal public singing at Bay Area occupation sites, marches and at BART stations. We sing to promote peace, justice, and an end to corporate domination, especially in support of the Occupy movement. Music has the power to build spirit, foster a sense of unity, convey messages and emotions, spread information, and bring joy to participants and audience alike.

There’s a link to their Facebook page, where various people have posted tons of lyrics, videos of songs, etc.

If there’s so much singing going on, why is it that at every protest march we have to endure the interminable protest chants in 2/4 time? You know those stupid protest chants: Hey ho, We won’t go, etc. — which repeat over and over and over again ad nauseum, and which make me want to chant in response:

Hey ho, let’s not chant
Those tired old political rants.
And hey ho, the drummers suck,
I mean to say, WTF?
And hey ho, let’s sing instead,
These protest chants are tired and dead.

Music tends to deflate and subvert boring ideological lyrics, so even the most didactic protest song is always better than protest chants. Therefore Occupella gets my full support (for what little my support is worth):

Here’s to the First Amendment to the United States Constitution, which, along with the rest of the Bill of Rights, is celebrating its 220th anniversary today. The senior minister here at our church, Amy Zucker Morgenstern, went to a vigil in Palo Alto to celebrate the birthday and protest rising threats to the freedoms enshrined in the Bill of Rights.

I was not able to go to that vigil, but Hershey, a member of the Palo Alto church, sent me an account of something a UMC minister went through while participating in the West Coast Port Shutdown on Monday in Seattle — this minister’s account, with free speech, religion, and an attempt to keep a public assembly peaceable, seems quite relevant to today’s birthday celebration.

Occupy Oakland is participating in the West coast port shutdown organized for today. Here’s my account of participating in this morning’s action — my perspective is very limited, but I felt it was worth presenting the unspectacular side of the Occupy movement.

I arrived at the West Oakland BART station right at 5:30 a.m., the time we were scheduled to start heading out to the various berths. I looked around for Kurt and Craig, the ministers I was hoping to meet, but couldn’t find them in the pre-dawn darkness. The organizers started us walking towards the terminal; we moved along at a pretty quick walk; this was a serious and committed crowd of people.

I joined the contingent heading to berth 30-32. One of the organizers told us that members of International Longshore and Warehouse Union (ILWU) Local 10 said they would not cross a picket line, so we formed two picket lines at the two gates near us. It was not the best-organized picket line I’ve ever seen: people kept drifting away and standing in the middle of the road in front of the gates, then drifting back. I saw a few people wearing shirts or carrying signs identifying themselves with organized labor — some members of the Oakland Education Association (OEA) carrying a banner of their union, someone with an IWW banner, and one or two others. The OEA members and the Wobbly stuck to the picket line.

OEA members on the picket line

I got to talking with Mark, a physician who works for one of the Bay area counties. END_OF_DOCUMENT_TOKEN_TO_BE_REPLACED

This coming Monday, December 12, Occupy Oakland will participate in the West Coast Port Shutdown, which aims to close ports from San Diego to Anchorage. A number of Unitarian Universalist clergy and laypeople will be meeting at the West Oakland BART station at 5:30 a.m. on Monday — an unpleasant hour for a night owl like me, but I’ll be there to lend my support. Information is available at Occupy Oakland, including information about outreach events this weekend. Further information is available at the West Coast Port Blockade Web site.

If you’re planning on being there, look for me in the crowd!

I’ve been reading Prophetic Encounters: Religion and the American Radical Tradition, the new book by Dan McKanan, the professor of Unitarian Universalist studies at Harvard Divinity School. McKanan points out that although we think of abolitionism, the New Deal, and the civil rights movement as separate movements, they are actually part of one continuous tradition of American leftist politics. McKanan also points out that religion has always been intertwined with the American tradition of radicalism — not that established religious institutions have embraced leftist politics in America, for no denomination or broad religious institution has done that, but rather that many American leftists have been deeply religious, and have drawn on their religious tradition for support and inspiration.

With that in mind, I was not surprised to learn that when Occupy Oakland was broken up by the police yet again last week, most of the 32 people who got arrested were at the Interfaith Coalition tent — including Unitarian Universalist ministers Jeremy Nickel and Kurt Kuhwald, and seminarian Marcus Liefert. (Jeremy even made the news in a small way: AP photographer Paul Sakuma snapped Jeremy’s photo as he stood handcuffed and surrounded by three police officers near the Interfaith Coalition tent.) Jeremy has been blogging about his participation in the Occupy movement, and his posts offer a good example of the connection between liberal religion (especially Jeremy’s Unitarian Universalist commitment to democratic process) and his leftist politics — just what Dan McKanan is talking about. Here’s Jeremy’s post about getting arrested — and here’s a follow-up post.

Christian Century magazine interviews social ethicist Gary Dorrien on the Occupy Wall Street movement. The interview is a promotional piece for an essay by Dorrien in the latest issue of Christian Century, but it’s worth reading on its own. Best bit from the interview:

As a social ethicist whose field was invented by the Social Gospel movement, I treasure the Social Gospel’s emphasis on just distribution and the common good, along with Reinhold Niebuhr’s realist emphasis on power politics and the faults of liberal idealism. But liberationist criticism adjudicates what I take from the Social Gospel and Niebuhrian traditions. Social justice must not be reduced to concerns about the fair distribution of things. It is also about giving voice to oppressed communities and being liberated from structures of oppression and dependency.