One of the things I miss about living in southeastern Massachusetts is the Macomber turnip. Macomber turnips produce large roots that look like light-colored rutabagas on the outside; when you cut the roots open, the flesh is crisp, relatively easy to cut, a creamy white with a light grain to it. You can cook them like any turnip or rutabaga; I like them boiled or steamed and mashed, though they can be a little watery. But I think the best way to eat them is to slice them into sticks and eat them raw. I’m eating one as I write this: it’s mild and sweet with a slight tang of turnip or radish, crisp and moist, like no other vegetable I’ve eaten.

I haven’t seen Macomber turnips anywhere outside of southeastern Massachusetts. But in that area, it’s such a famous vegetable that the town of Westport gave it its own historic marker, on Main Road, near Swartz’s Way. According to the inscription, the origin of the Macomber turnip was rutabaga seed which Aiden and Elihu Macomber brought back from the Philadelphia Exposition of 1876. When we lived in the area, we were told that the rutabagas (Brassica napus), or perhaps they were turnips (Brassica rapa), then crosspollinated with radishes (Raphanus sativus) to form this new variety. Based on the taste, I find it more plausible to believe that Macomber turnips are a cross between B. napus and B. rapa. I’d be interested to know what a qualified taxonomist had to say about the matter.

In any case, it is such a pleasure to taste the Macomber turnip again. Sometimes, I wish they would become a fad food, so I could buy them here in California. More often, I’m glad they remain a local specialty, because it is possible to grow them so they become sharp and bitter; better that American Agribusiness leaves them alone. 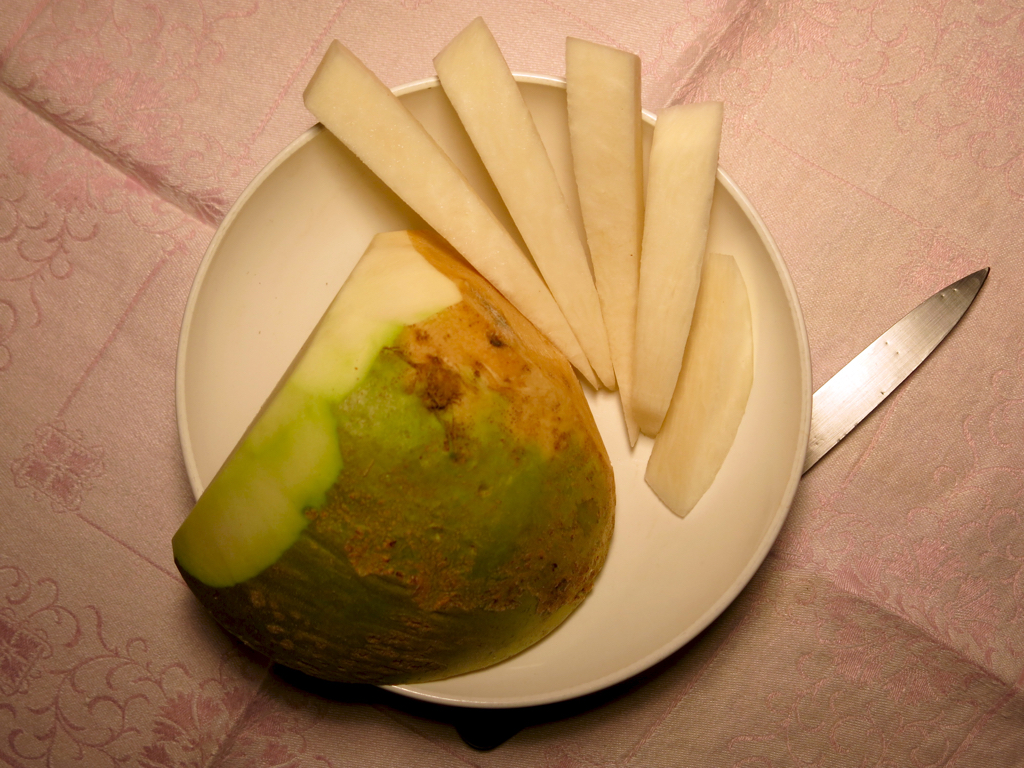