Ma-ku is a Taoist deity of longevity. In the image below, she can be identified by her hoe and a basket of the fungus of immortality. This Ching dynasty porcelain presentation dish was made sometime in the eighteenth century, and is now in the Asian Art Museum in San Francisco (accession no. B60P376): 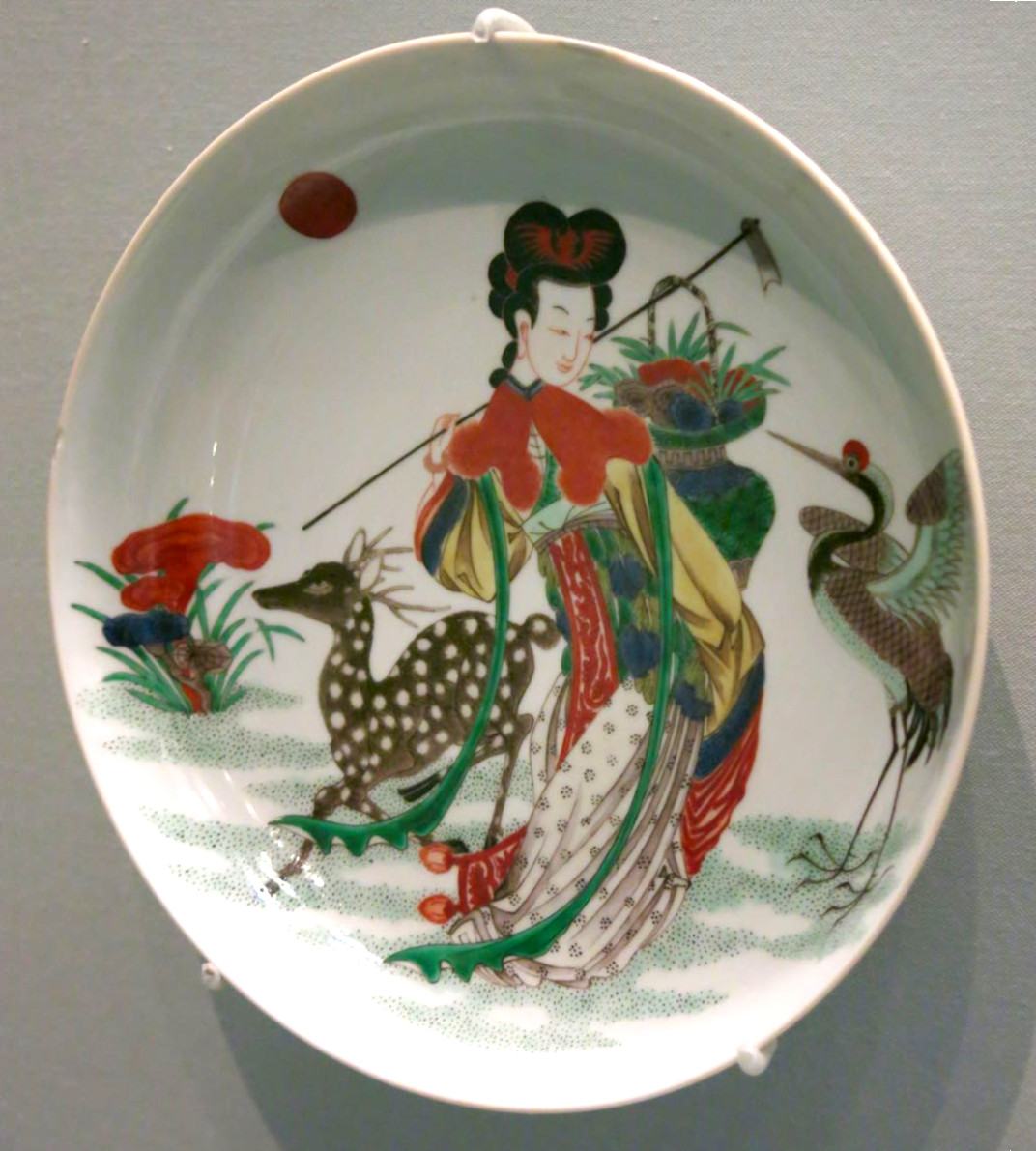 Today in the West, Ma-ku’s name is sometimes translated as “Hemp Maiden,” which has led a number of Westerners to misappropriate her as the patron deity of pot smokers; you can find plenty of Web sites that state this as an absolute fact. Note, however, the iconography of Ma-ku often shows her, not with marijuana, but with a basket of the fungus of immortality. And so, not surprisingly, other Western writers have jumped to the conclusion that Ma-ku is not the goddess of marijuana, but rather the goddess of psychoactive mushrooms. Obviously, psychoactive mushrooms do not produce longevity, but we Westerners do love to superimpose our own meanings on the gods and goddesses of other times and other cultures.

Rather than imposing Western values on Ma-ku, I’m more interested in learning her role and place in Chinese culture. I found it difficult to locate good solid information about Ma-ku in English. But Mesny’s Chinese Miscellany (1899), though not a scholarly work and probably biased by a colonial outlook, has a useful entry on Ma-ku under the general heading of Gods and Goddesses:

Ma Ku: A Taoist immortalised female saint or Hsien Nu; a portrait of Ma Ku is very popular as an emblem of longevity, and is one of the very best presents a person can make to his superiors on the occasion of a birthday feast.

During my stay in Kuei-chou, I received several such presents, in the form of a portrait of Ma Ku with a pilgrim’s staff and a basket of flowers over her shoulder, the whole embroidered in fancy coloured silk floss, on a scarlet satin tablet some 8 or 10 feet long by about 3 feet wide.

Mayers writing of Ma Ku says that she is “One of the female celebrities of Taoist fable. She is said to have been a sister of the immortalized soothsayer Wang Feng-ping (see Wang Yuan), and like him to have been admitted into the ranks of the genii [i.e., the immortals]. It is related that once when Fang-ping revealed himself in the presence of Ts’ai Ching, whom he chose as his disciple and taught, by corporeal sublimation, to free himself from the bonds of death, the genii was accompanied by his sister Ma Ku, who appeared in the semblance of a damsel of eighteen or twenty, arrayed in gorgeous apparel, and who waited on her brother and his pupil with strange viands served in platters of gold and chrysoprase.

“The wife of Ts’ai Ching was newly delivered of a child, seeing which Ma Ku took some grains of rice and threw them on the ground, where they at once became transformed into cinnabar (the magic of the alchemists). Fang-ping seeing this exclaimed with a smile, ‘Sister, do you still indulge in child’s play?’ to which the damsel replied: ‘Since I have been our handmaid, thrice has the eastern sea become fields where the mulberry grows!’…

“Hence the Tsang Sang Chih Pien, signifying the cyclic revolutions of nature and cataclysms occurring upon the earth’s surface such as beings of immeasurable longevity alone are priveleged to witness more than once.” It is on this account that the image or portrait of Ma Ku is so highly prized by the Chinese as an emblem of extreme long life and happiness.