Melville Best Anderson was born in Kalamazoo, Michigan, in 1851. He studied at Cornell University in 1870-72, where he was a classmate of David Starr Jordan, who became president of Stanford University.

Anderson was a distinguished scholar best known for his translation La Divina Commedia: The Divine Comedy of Dante Alighieri, a Line-for-Line Translation in the Rime-form of the Original (Yonkers-on-Hudson, N.Y., World Book Co., 1921). He became friends with Ewald Flügel in 1891, while staying in Leipzig. Flugel joined the faculty of Stanford partly through the good offices of Anderson; and Flugel was another one of the early members of the Unitarian Church of Palo Alto. Unfortunately their differing viewpoints on the First World War put a damper on their friendship; Flügel was a pacifist, while as early as 1916, Anderson advocated for the entry of the United States into the First World War in a long self-published poem; one stanza will suffice to give a sense of the dreary whole:

Since men first gathered into clans
Was peril never yet so sharp;
Loud would I smite the chorded harp:
Awake! awake! Americans…

The Stanford Daily, vol. 49, no. 48, Nov. 2, 1916, p. 3, said: “The poem, which is a denunciation of the apparent apathy of Americans in regard to the issues of the great war, was dedicated to David Starr Jordan, and written during Anderson’s stay in Florence, Italy, where he has been translating in triple rhyme ‘The Divine Comedy’ of Dante.” 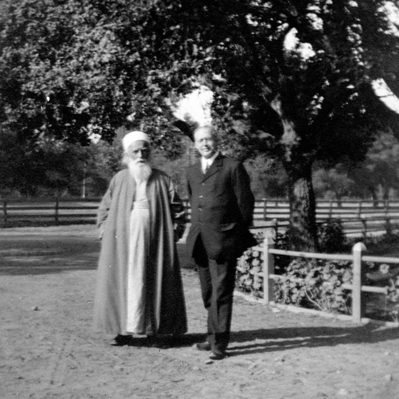 END_OF_DOCUMENT_TOKEN_TO_BE_REPLACED

Here are documents that tell the story of the early years of the old Unitarian Church of Palo Alto.

The most important event in the department of church extension during the past month was the dedication of the new church-building at Palo Alto. This occurred on Sunday morning, March 24th. It was a home affair, simple, but very interesting to the faithful Unitarians who have worked so hard and sacrificed so much to bring the enterprise to a successful termination. The erection of this church was made possible by the generosity of Mrs. Frances A. Hackley, of Tarrytown, N. Y., who has done so much for the Unitarian cause in this department. The members of the church entered into the work with a determination to make the new church-building not only useful but beautiful and convenient. The interior of the new church is all that could be desired; the exterior will not show its merit until the vines grow over it, as the vines are an essential part of the plan. The services in dedication were well attended. 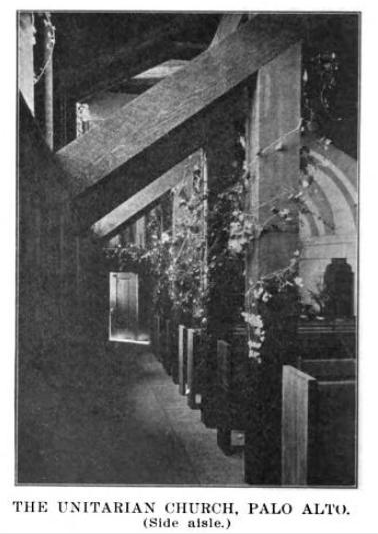 Above: The old Unitarian church, designed by Bernard Maybeck (from The Pacific Unitarian, May, 1907, p. 206)

END_OF_DOCUMENT_TOKEN_TO_BE_REPLACED

Below is a list of the charter members of the Unitarian Church of Palo Alto, organized on November 12, 1905. This list is taken from Donna Lee’s transcription, found in her 1991 history of the old Unitarian church. I believe she made some transcription errors; unfortunately the original document appears to have been destroyed, though a photocopy definitely exists, and at some point I will look at the photocopy to try to check the accuracy of Lee’s transcription.

In the mean time, I have been doing some research on these early Palo Alto Unitarians. The majority of them are associated with Stanford — students, faculty, staff; and spouses and parents of same. There are several people I have not been able to track down; let me know if you happen to know anything about them.