Carol and I decided to hike up to the top of Bald Knob from the parking lot at Higgins Canyon Road. We climbed steadily through the Coastal Redwoods up into the Douglas Fir forest, and in less than two hours were at the summit of Bald Knob. It was a little disappointing, because Bald Knob wasn’t at all bald, and instead of the views we had hoped for, we just had a Douglas Fir forest. But it was a beautiful Douglas Fir forest, smelling of fir trees and woods, and it was quiet, so we sat down to eat lunch.

After lunch, we walked down Irish Ridge Trail, and just a short distance down the trail, there were green grassy slopes sprinkled with wildflowers. Dad and I used to talk about the way wildflowers sprang up all over the hills of coastal California during the spring; it was one of the things that had most impressed him, I think, in one of his early trips to California. Unfortunately, Dad’s dementia means that that well-worn, familiar conversation is no longer possible, so I took a photograph of some flowers instead — Dad has always taken photographs documenting what he saw in the world; and still does, sometimes. 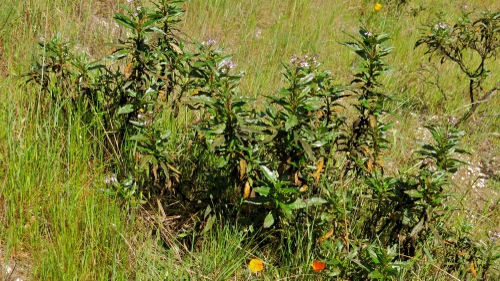 And a little way further down the trail were the views that we had hoped for. We looked out over an open slope, which was covered with Poison Oak in full bloom, down into the Lobitos Creek valley, out at the Pacific Ocean. Some kind of flower was sending its delightful perfume into the sun-warmed air around us; I’m pretty sure this perfume came from the Poison Oak; maybe Poison Oak is good for something after all. 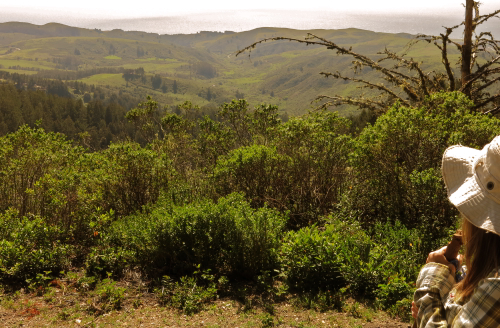 On the way back down the trail, Carol said that these tree roots, balanced precariously on a gradually eroding bank, looked like a huge Muppet monster: 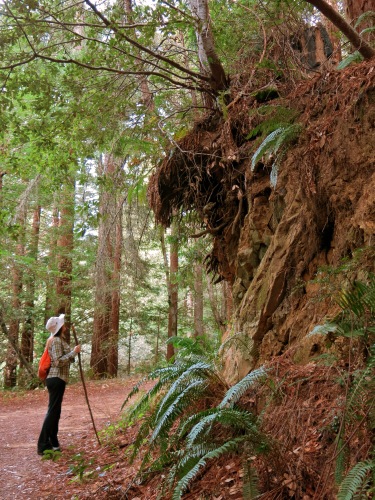 By the time we got back to the car, it was cloudy and cool, down to 52 degrees. We had walked about 11.4 miles, with a total elevation gain of about 2,500 feet. We felt kind of tired.