Another in a series of stories for liberal religious kids. This is a story about selfishness, and it also gives an insight into the supposed magical powers of Daoist priests. Source: Pu Songling, trans. Herbert A. Giles, Strange Stories from a Chinese Studio (London: Thomas De La Rue & Co., 1880).

One day in the marketplace, a man from the countryside was selling pears he had grown. These pears were unusually sweet with a fine flavor, and so the countryman asked a high price for them.

A Daoist priest, dressed in a ragged old blue cloak, stopped at the barrow in which the countryman had displayed these lovely pears.

“May I have one of your pears?” he said.

The countryman said to him, “Get away from my barrow, so that paying customers may buy my pears.” For the countryman knew that the priest expected him to give him one for nothing. But when the priest did not move, the countryman began to curse and swear at him.

The priest said, “You have several hundred pears on your barrow. I ask for a single pear, the loss of which you would not feel. Why then, sir, do you get angry?”

The beadle of the town, who was charged with keeping the peace and maintaining order, came over to see what was going on. This beadle saw that things were getting out of hand, so he purchased a pear from the countryman, and presented it to the Daoist priest.

The priest bowed low to the beadle, thanking him for the pear. Then the priest turned to the crowd who had gathered round, and said, “Those of us who are Daoist priests have left our homes and given up all wealth. So when we see selfish behavior, it is hard for us to understand it. Now as it happens, I have some pears with a very fine flavor, and unselfishly I would like to share them with you.”

Someone in the crowd called out, “But if you have pears of your own, why didn’t you just eat one of them? Why did you have to have one of the countryman’s pears?”

“Because,” said the priest, “I wanted one of these seeds to grow my pears from.” So saying, he ate up the pear that the beadle had given him. When he had finished eating, he took one of the seeds, unstrapped a pick from his back, and bent down to make a hole in the ground, four inches deep, with the pick. Then he dropped the seed into this hole, and filled it in with earth. Turning back to the crowd, he said, “Could someone bring me a little hot water, please, with which to water the seed?”

One among the crowd who loved a joke went into a neighboring shop and fetched him back some boiling water.

The priest poured the boiling water over the place where he had made the hole. Everyone watched closely, for though it seemed like a joke, Daoist priests were supposed to have knowledge of alchemy and magic and the mystical arts.

Suddenly the people in the crowd saw green sprouts shooting up out of the ground, growing gradually larger and larger until they became a tree. This pear tree — for it was, indeed, a pear tree — quickly grew in the spot, and sprouted green leaves, and then put forth white flowers. Bees were heard buzzing among the flowers, then the petals dropped, and before long the tiny hard green fruits had grown and ripened into fine, large, sweet-smelling pears which hung heavy on every branch.

The priest picked these fine pears and handed them around to everyone in the crowd. When at last everyone had a pear, and all the pears had been picked from the tree, the priest turned and with his pick he hacked away at the tree until, after a long time, he cut it down. Picking up the tree and throwing it over his shoulder, leaves and all, he walked quietly away.

Now this whole time, the countryman had been standing in the crowd, straining his neck to see what was going on, and forgetting all about his own business. When the priest walked away, he turned back to his barrow and discovered that every one of his pears was now gone. He then knew that the pears that old fellow had been giving away were really his own pears. And when the countryman looked more closely at his barrow, he saw that one of its handles was missing, for it had been newly cut off.

Boiling with anger, the countryman set off after the Daoist priest. But as he turned the corner where the priest had disappeared, there was the lost wheel-barrow handle lying next to a wall. It was, in fact, the very pear tree that the priest had cut down.

But there were no traces of the priest — much to the amusement of the crowd in the market-place, who watched the countryman’s rage as they finished eating their sweet, juicy pears.

No image-maker worships the Gods. He knows what they are made of.

“The Picture on the Kitchen Wall,” a story from the classic Sophia Fahs book From Long Ago and Many Lands, has some serious problems: it’s arguably not very Chinese, it contains a number of hidden biases, etc. This story is, in fact, a good example of why we should question everything that Sophia Fahs wrote — even though she remains the most brilliant Unitarian Universalist religious educator we’ve ever seen, she was not by any means perfect.

“The Picture on the Kitchen Wall” purports to tell the back story of the Kitchen God, the minor deity in Chinese popular religion whose image is mounted somewhere near the kitchen stove. Each year, according to most accounts, the Kitchen God leaves the kitchen and reports to a higher deity (sometimes identified in English-language accounts as the Jade Emperor) about the good and bad deeds of the family in whose house he lives. In Fahs’s retelling of the Kitchen God’s story, he was originally a historical figure, a person named Chang Kung.

In tracing Chang Kung, I find him mentioned in a book of maxims attributed to Emperor K’ang-hsi [Kangxi], who ruled China from 1661-1722, an early emperor of the Ch’ing [Qing] dynasty. These maxims appeared in English translation in 1817 as The Sacred Edict, Containing Sixteen Maxims of Emperor Kang-He, Amplified by his Son, the Emperor Yoong-Ching, trans. Rev. William Milne (London: Black, Kingsbury, Parbury, and Allen, 1817), pp. 51-52:

“Formerly, nine generations of Chang-kung-e inhabited the same house; and a Mr. Chin of Keang Chow had seventy persons who all ate together. Those who belong to one family, and are of one surname, should think of their ancestors; rather exceed, than be deficient in respect; rather surpass, than be wanting in kindness. When there is prosperity, rejoice mutually, by an interchange of social affections; when adversity, sympathize mutually, by affording reciprocal aids. In building a family temple to sacrifice to ancestors; in erecting a domestic academy for instructing youth; in purchasing a charity field for the supply of indigent brethren; and in correcting the family calendar, to interweave the names of the more distant relatives — let the same mutual aid be afforded.”

Chang Kung continued to be mentioned by later English-speaking writers as the nineteenth century progressed. A typical example, with an unpleasantly racist conclusion, may be found in Arthur H. Smith D.D., Village Life in China: A Study in Sociology (New York: Fleming H. Revell Co., Publishers of Evangelical Literature, 1899), p. 27:

END_OF_DOCUMENT_TOKEN_TO_BE_REPLACED

When you hear the sound of drums and cymbals outside your apartment coming from somewhere down the street, of course you go out and find out where they’re coming from. It was the West Coast Lion Dance Troupe performing in the small parking lot of the hardware store near us. It was fun to watch the brightly-colored lions dancing in the warm February sunshine: 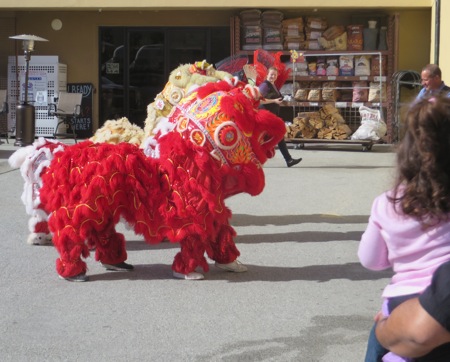 This hardware store, formerly independent, was bought out by a small locally-owned chain of hardware stores. Since they were bought out, they’ve been doing things to attract the attention of passers-by. In addition to the lion dancers, the local animal shelter had a tent set up and was promoting adoptions of small pets. Not a lot of people came, but we were all smiling.

After I watched the dancers, and glanced at the terrarium with a lizard or something in it, I started walking home — and as I walked I wondered why our UU congregation doesn’t do things like this to attract the attention of passers-by. I know what you’re going to say: “Most UU congregations try to hide from passers-by.” Well, I’m not feeling that cynical today, when it’s so warm and sunny and the faint smell of perfumed flowers permeates the air and makes my eyes itch. I think we’ve just never thought about inviting a lion dance troupe, or (honk!) an activist street band, or or some other community arts organization, to perform in front of our building. Maybe if we had sales goals to meet, as retail establishments do, we’d be thinking more along those lines. Not that I think we should have sales goals per se, but you know what I mean.