Even though the temperature got up to nearly eighty degrees today, it feels like fall. The sun is noticeably lower in the sky, and daylight is noticeably shorter than nighttime. I went for a walk up in the hills overlooking Half Moon Bay, and once you get out from under the redwoods into the chaparral, the plants look tired and dry and worn out, ready for the winter rains. Even the fall asters look faded now, with blossoms that are almost white instead of pale violet. 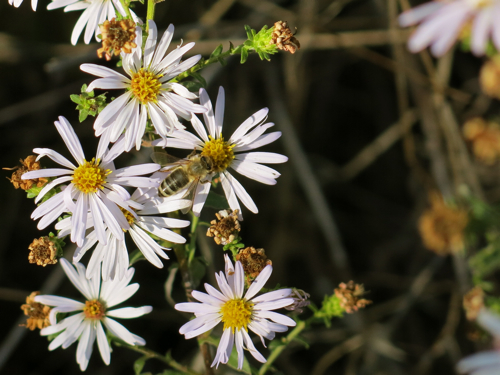 During the long climb back up to the trail head, I kept stopping to admire the way the afternoon sun shone gently on the steep hills and canyons that descended to the ocean; admiring the view was also a good excuse to stop and catch my breath when the trail was steepest. After one particularly steep stretch, I turned and saw a Golden Eagle below me. This was a perfect excuse to stop for a moment. I watched the eagle ride the breeze down the canyon until it disappeared from my view behind a forested ridge.

After a week of twelve hour days, getting everything set for the first day of Sunday school, I was ready for a break. When Carol suggested we go for a late-afternoon walk at Purisima Creek Redwoods Open Space Preserve, I was ready to go.

About an hour into our walk, Carol pointed down at the ground. “What’s that?” It was a small animal, dead. A mouse? No, a closer look revealed it was a mole. I turned it over carefully. There was a bit of a flat place where it had been lying; presumably decomposition was beginning. But you could still see the general shape of the animal. I admired it for a while then made a sketch, slightly smaller than the actual size of 110 mm total length, which I refined once we got home: 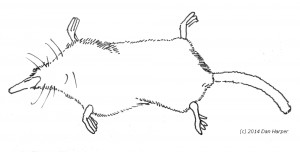 Of the two species of mole which inhabit our area, it was clearly a Shrew-mole (Neurotrichus gibbsii). According to Jameson and Peeters, in Mammals of California, we humans don’t really know what this species eats, or how it reproduces: “The Shrew-mole seems to feed indiscriminately on a board spectrum of soil-dwelling insects, pill-bugs, and centipedes”; it “appears to breed in late winter”; and “little is known of its reproductive habits” (my emphases). Another organism to which we humans live in close proximity, but about which we know little. 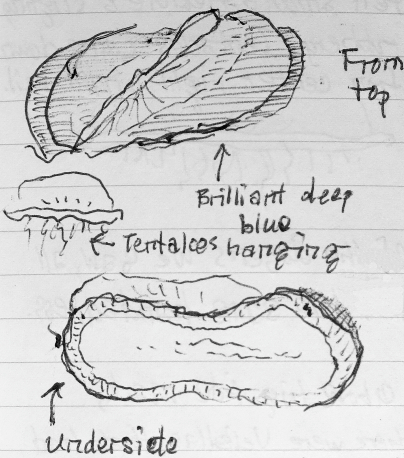 We camper overnight in Big Oak Canyon, which is a small canyon off Silverado Canyon. Sometime before dawn, fog rolled up Silverado Canyon, leaving a heavy dew on our sleeping bags. By 7 o’clock, you could look up the mountains behind our campsite and see blue sky starting to show in the sky above the ridgeline: 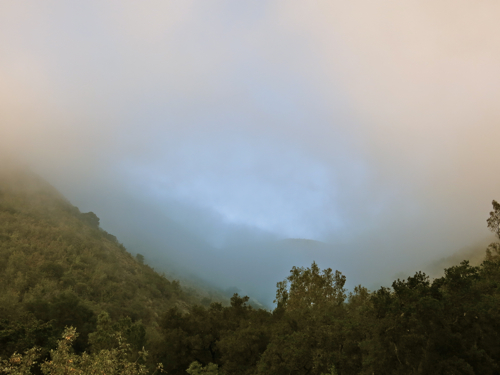