As I walked over to the science fiction section in the library, I could hear a resonant baritone voice in a far corner. Some idiot on their cell phone, I muttered under my breath. Let’s see, McCaffrey, nope further back, LeGuin, getting closer.

I tried to shut the phone conversation out of my mind, but it was so full of Silicon Valley cliches that it leaked past my defenses. And every other word seems to be “I” or “me,” I said under my breath. I walked around the corner to get to the Ss, and there he was: a young white male, schlubbily dressed. I ignored him as best I could and looked for Stross, but the book I was looking for wasn’t there. Let’s try Matthew Hughes.

The Hs were just around the corner from where the young man was talking. It took some effort to shut the loud self-important voice out of my head. No Hughes on the shelf, but I got distracted by an old Harry Harrison novel. Though I studiously paid no attention, I could sense the young man’s back looking at me with annoyance; I had entered his private space. He walked away, still talking loudly, his self-important voice fading to a distant but resonant whine.

The Harrison novel was not nearly as good as I remembered, so I left it on the shelf and went to look for Pratchett. It occurred to me that the young man with the self-important loud voice was very much like a character from a Terry Pratchett novel: one of those self-involved narrow characters who is certain he is saving the world (from something it doesn’t need saving from) and who is bewildered when he makes a giant mess out of everything.

May the gods preserve us from such people, I muttered to myself as I checked out my books, and then realized I was talking to myself a bit too much. Not a good sign.

These lichens were growing on reddish soil exposed by a road cut, in the redwood forest above Camp Meeker, California. The lichens in both photos are approximately the same size; in the first photo, the edge of a nickel appears at lower left to provide a sense of scale. 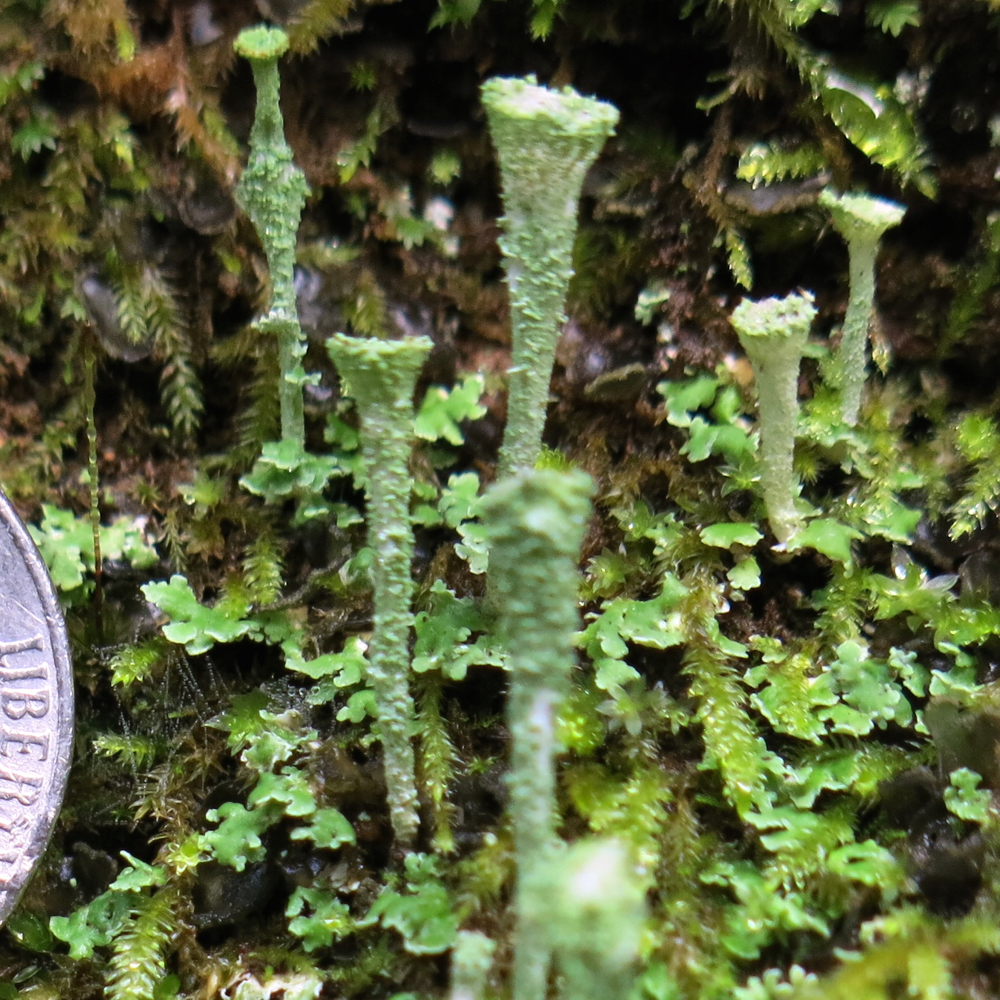 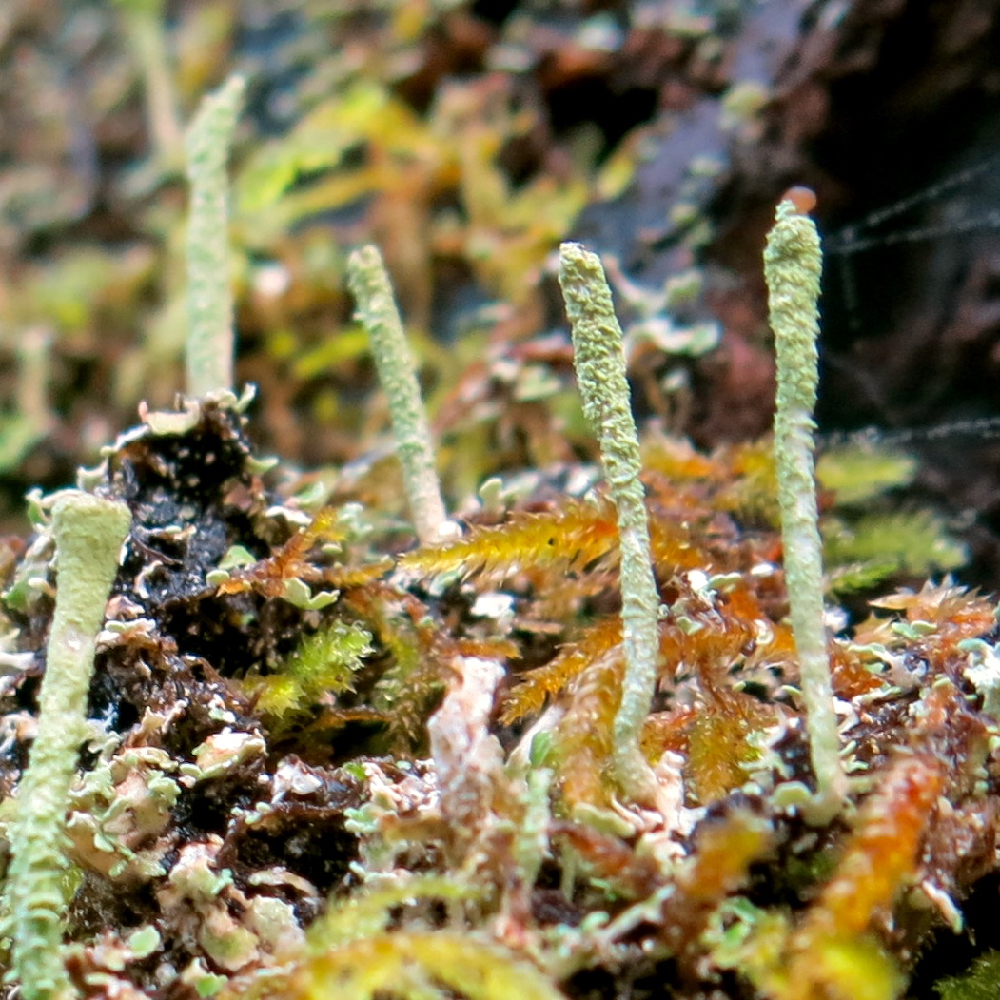 As to identification, these lichens are in the genus Cladonia: the primary thallus consists of whitish-green squamules (the little leaf-like things at the bottom of the organism); and arising from the squamules is the podetium, an upright structure characteristic of the genus Cladonia. But to determine which species of Cladonia, I would have had to collect some samples and carefully examined them. In Lichens of California, Mason E. Hale Jr. and Mariette Cole state that “Cladonia is one of the first lichens collected by amateurs; since I am a rank amateur when it comes to lichens, it is thus no surprise that I paid so much attention to these showy and fascinating lichens.

While working on a sabbatical project, I discovered that Louis F. Benson, in his book The English hymn: its development and use in worship (New York: Hodder & Stoughton, George H. Doran Co., 1915), lists nineteen U.S. Unitarian hymnals published in the thirty-four year period from 1830 to 1864. Nor does Benson claim this is an exhaustive list; indeed, he focuses almost exclusively on hymnals published in and near Boston (you can read this list below).

None of these hymnals was published by the American Unitarian Association (AUA). In some cases a large congregation compiled their own hymnal, which other congregations then adopted; more often, an individual editor or group of editors compiled a hymnal as a speculative venture, hoping that congregations would purchase it. In fact, the AUA didn’t publish its first hymnal until 1868.

In the twentieth century, the vast majority of Unitarian (and later Unitarian Universalist) hymnals were published by the AUA, and then from 1937 on by the Unitarians and Universalists together. In the post-World War II era, I’m only aware of two hymnals that were not published under denominational auspices (excluding one-author or one-composer hymn/song collections, such as those by Rick Masten).

So the vast majority of Unitarian Universalist congregations today use a denominationally-produced hymnal. Why is this? Partly I think it’s because copyright law has become much more strict in the past century; anything published after 1922 is probably covered by copyright, and it can be difficult and expensive to track down copyright owners and buy permission to reprint their text or music; it’s going to take a large-ish organization to have enough resources to deal with copyright challenges. But also I believe we have all bought into the notion that the only “real” hymnal is one published by the denomination.

What if one of the large Unitarian Universalist congregations put together a new hymnal? The hymnbook compilers would face significant challenges posed by copyright issues. To balance those challenges, the ease of self-publishing and the rise of print-on-demand would make layout, printing, and distribution extraordinarily easy. Technical and legal issues aside, wouldn’t it be nice if Unitarian Universalist congregations had a choice of hymnals? — at the very least, we could expand the number of our song choices.

And for those who are interested, I’ll append a very incomplete list of Unitarian and then Unitarian Universalist hymnals, so you can get a sense of the great variety of hymnals that were once available. (I apologize for not researching Universalist hymnals, but this has been too much of a distraction from my sabbatical project as it is; I can’t justify procrastinating any longer.) END_OF_DOCUMENT_TOKEN_TO_BE_REPLACED

In a talk titled “Dude You Broke the Future,” science fiction author and atheist Charlie Stross takes on Ray Kurzweil and other advocates of the “singularity,” the moment when all our problems will be solved with the emergence of transhuman artificial intelligence:

“I think transhumanism is a warmed-over Christian heresy. While its adherents tend to be vehement atheists, they can’t quite escape from the history that gave rise to our current western civilization. … If it walks like a duck and quacks like a duck, it’s probably a duck. And if it looks like a religion it’s probably a religion. I don’t see much evidence for human-like, self-directed artificial intelligences coming along any time now, and a fair bit of evidence that nobody except some freaks in university cognitive science departments even want it. What we’re getting, instead, is self-optimizing tools that defy human comprehension but are not, in fact, any more like our kind of intelligence than a Boeing 737 is like a seagull. So I’m going to wash my hands of the singularity as an explanatory model without further ado — I’m one of those vehement atheists too — and try and come up with a better model for what’s happening to us. …”

I find it delightful to see a self-proclaimed “vehement atheist” calling out other atheists for doing religion. This is especially admirable, since those other atheists would doubtless insist that they are not doing religion at all; they would claim that they are doing science. Not only that, those other atheists are doing bad religion — transhumanism is as bad as the Prosperity Gospel, insofar as both types of religion are barely believable, have no redeeming social worth, do not engage in worthwhile cultural production, assert that the vast majority of humanity will not be “saved,” spread fear, and are stupid and hard to believe.

This is just a parenthetical remark in a much longer talk — and the rest of the talk is definitely worth reading, particularly for Charlie Stross’ take on corporations as AIs that are making global climate change accelerate.

What a wild ride we Unitarian Universalists had in 2017.

The wildest part of the year happened last spring, when Peter Morales, the first Latino president of the Unitarian Universalist Association (UUA), resigned from office, with only a few months left in his term. The events that led up to his resignation were somewhat bizarre. Two of the finalists for a senior staff position at the UUA were both members of the UUA Board, which should make us wonder just how incestuous UUA hiring is (I mean, seriously, can’t you find viable candidates outside your volunteer board? — don’t you know how bad that looks?). Then when the white male gets hired in preference to the Latina woman, social media erupts in accusations of “Racism!”

Shouting “Racism!” was not a bad response, but hardly anyone mentioned the sexism involved. Now it’s not sexism every time the man gets hired over the woman. Nor is it always sexism when the man who gets hired is an ordained minister and the woman is a layperson (for while anyone who has done feminist power analysis knows that sexism often hides behind choosing the person with the most professional credentials, on the other hand sometimes the person with more professional credentials is in fact more qualified). And it’s not always sexism when the woman has a background in “women’s work” (which was true in this case; the woman in this case is a religious educator, and works with children, in a profession that is underpaid compared to parish ministry). But it most definitely was sexism when Peter Morales said in an interview that he could not hire religious educators for senior staff positions because they were not capable of that kind of high level work.

I was astonished at the rage I felt after reading that Peter Morales thought I was incapable of working for him in a high level staff position, simply because I am a religious educator, someone who does “women’s work,” in a profession where more than 90% of my colleagues are women, many of whom are poorly-paid part-time workers. Had I been British, I would have given Peter Morales the two-finger salute; but since I’m a New Englander, that would be cultural misappropriation, so instead I looked in his general direction with withering scorn. END_OF_DOCUMENT_TOKEN_TO_BE_REPLACED