I forgot to tell you about the man we met in the rest area yesterday.

We were sitting at a picnic table eating lunch when an unshaven man walked up to the table, pointed to our car, and said, “Are you from California?” When you’re in a busy highway rest area, you do have to be careful, so I said in a noncommittal voice, “Yep.” “Well, I’m from Washington,” he said politely, pointing to his small pickup truck with Washington plates. And since he seemed reasonable, and not trying to sell something, or beg something, or steal something, we settled in for a chat.

He was on his way from the Olympic peninsula to Florida to visit grandchildren. His wife had flown on ahead, and he was following in their truck. “She doesn’t like to drive all that way,” he said. He was a retired airline pilot, he said, and I wondered to myself if he had had his fill of flying. Carol noticed he did not have a West Coast accent, and he admitted to having grown up in Alabama. Somehow we wound up talking about music, and he told us about his stepson who played folk music with his girlfriend in a band called The Winterlings. We promised to look them up on YouTube.

Then he said, in his polite soft spoken way, if we had heard of Planet X and Nibiru. We said we hadn’t, and he assured us that we could find out all about it on YouTube. It seems there is a planetary system that is on a collision course with Earth. When it gets close, and it is scheduled to do so quite soon, there will be a rain of 70 pound meteors that will ultimately kill off 70% of human life on Earth. I said I was OK with that as long as we were part of the 30% who survived; but he said we were too late for that, the planetary elite has already made their underground bunkers, and they were keeping the existence of Planet X from us so we would not fill up their bunkers.

That was yesterday. Today’s drive brought us through the hills in the middle of Kentucky and Tennessee. The beauty of the landscape appeared in what was immediately before us, like the Queen Anne’s Lace that bloomed everywhere. I don’t see Queen Anne’s Lace out on the West Coast, and when we get east of the Mississippi I like to stop and admire the delicate white umbrelliform blossoms on long, nodding stalks with feathery leaves. 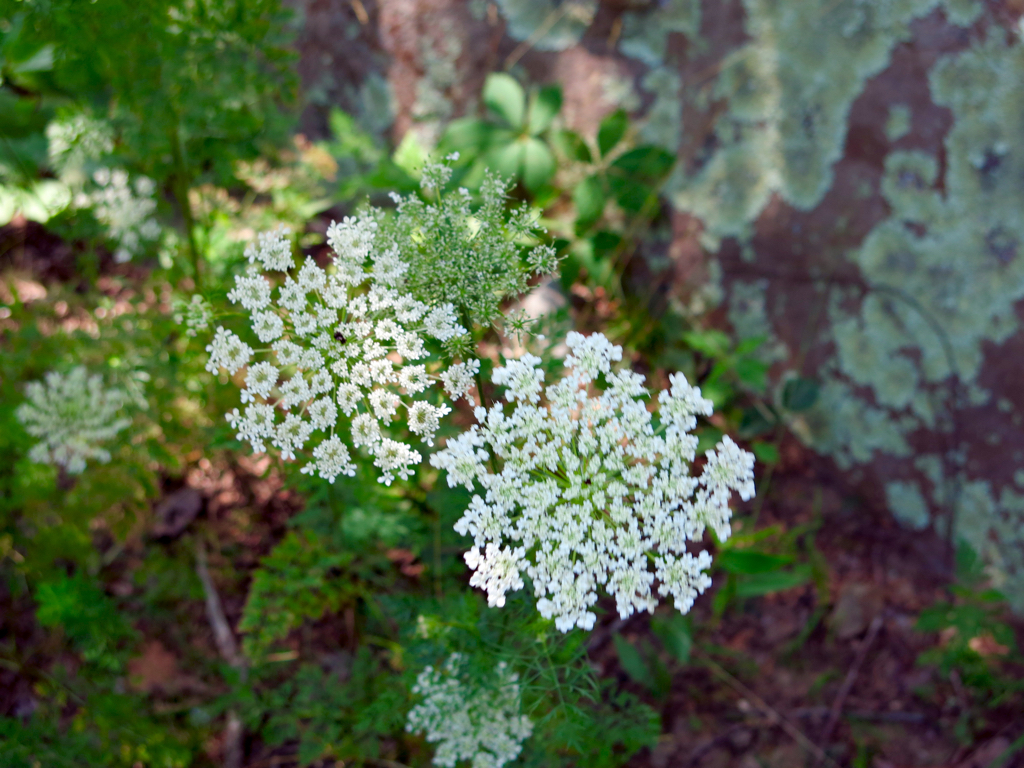 We arrived at DeSoto State Park, where we were to spend the night. It turned out we came at the wrong time of year: the azaleas are not in bloom, it is not the fall foliage season, and the small creeks are dry. We walked to Indian Falls, but there was no falls: only a dry creek bed, and a limestone ledge which presumable constitutes the falls, when there’s water. 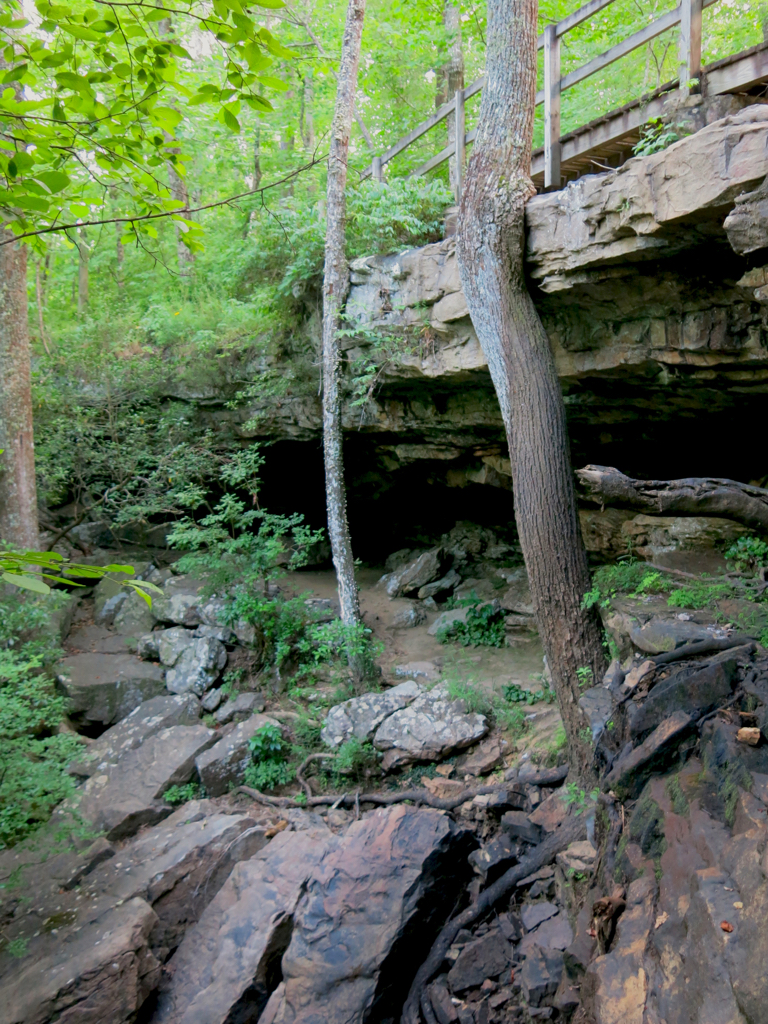 We stopped at the campground store to buy propane, and I saw that they had a small garden with carnivorous Pitcher Plants. I’ve always wanted to see Pitcher Plants, so I stopped to admire them. I watched a wasp walk all around the mouths of the plants, but it didn’t go in the plant to meet its doom. 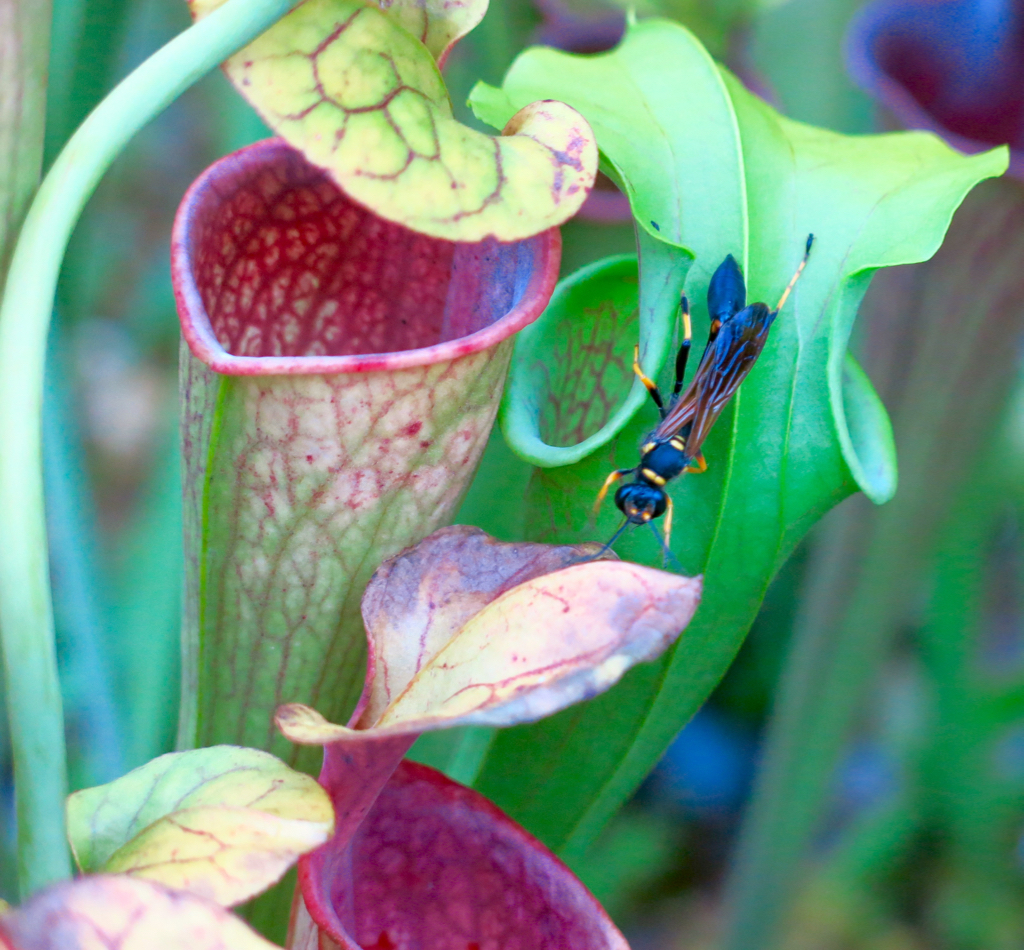 Posted on July 2 due to lack of Internet access.