Recently, I heard some new verses for the parody version of “Old Time Religion.” Here they are:

O we sing the praise of Horus
Like the Dynasties before us —
A three thousand year old chorus;
And that’s good enough for me!

Worshiping at the altar of Wall Street:

The mighty Dollar is my Savior,
She controls my ev’ry behavior
Whether I spend her or I save her;
And that’s good enough for me! 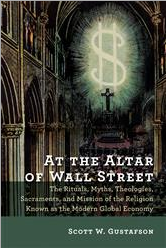 I was particularly interested in these verses because they happened to be about three religions I am currently studying. And lest you think I’m kidding about Wall Street being a religion, you might want to check out Scott Gustafson’s new book At the Altar of Wall Street: The Rituals, Myths, Theologies, Sacraments, and Mission of the Religion Known as the Modern Global Economy (Eerdmans Publishing, Sept., 2015), in which the author “argues that economics functions in our current global culture as religions have functioned in other cultures.”