My cousin and her husband were visiting from Seattle, and she wanted to go to the beach to see the sun set in the Pacific. So Carol and I and the two of them drove over the Coastal Range to Half Moon Bay.

“Maybe we’ll see the velellas,” said Carol. The velellas — scientific name Velella velella — are small bright blue creatures that are distant relations of the jellyfishes. They float on the surface of the ocean, feeding underneath the water with tiny tentacles, and being blown about by the wind on their small sail. Recently, hundreds of them have been blown up along the shore in San Francisco and Santa Cruz and Humboldt County. But I was skeptical that we’d see velellas, since I had seen nothing about them being blown onto beaches in San Mateo County.

When we got to the beach, the fog was so thick it was obvious that we weren’t going to see the sun set in the Pacific. But Carol said, with a big grin, “Look, the velellas!” Sure enough, all over the beach just above the line of waves, were these little blue things. The biggest one I saw would fit easily in my hand. 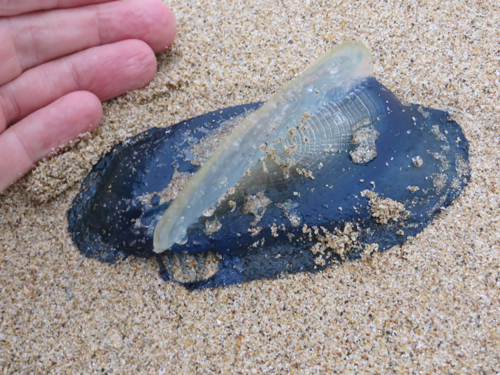 When you got down and looked at them closely, they were beautiful and amazing creatures. The San Francisco Chronicle interviewed Jim Watanabe, who works at the Hopkins Marine Station in Monterey County; the newspaper quotes him as saying, “They’re a nice reminder of the diversity of other life in the sea that we sometimes don’t think about.” 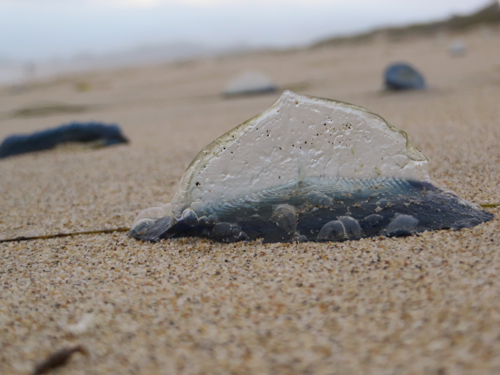 The velella turns out to be a highly interesting organism that is not particularly well understood, as this Web page from Walla Walla University points out.

One thought on “Velella velella”