I’ve been researching a lesson plan for an upper elementary lesson on Oedipus and the Sphinx. This research led me to a mathematical game or puzzle involving sphinxes.

The “sphinx” of this puzzle is a five-sided figure, made up of six equilateral triangles: 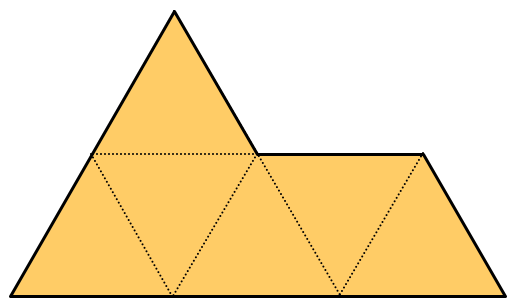 This pentagon is called a sphinx because it looks a little like the giant Egyptian Sphinx at Giza — see below. In the image below, you can see that unlike the Greek Sphinx, the Egyptian Sphinx did not have wings. However, in spite of this difference, the Greeks traced the origins of their Sphinx back to Egyptian Sphinxes. 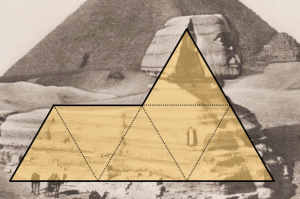 The interesting thing about the sphinx shape is that you can make larger sphinxes using smaller sphinxes (alternatively, you can dissect a larger sphinx into smaller copies of itself, though from a practical puzzle standpoint that’s difficult). Here’s how to try this out yourself. Below is a printable sheet of sphinx shapes that you can print onto heavy paper to be cut out: 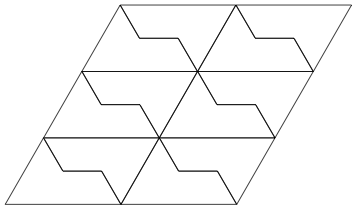 Click here for a PDF of sphinx shapes for cutting out

OK, print out at least two sheets of the above PDF. Now here are several sphinx puzzles for you:

(1) Cut out 4 sphinx shapes to start, and make 1 larger sphinx shape from those 4. When you complete this puzzle, you have made a Size 2 Sphinx.

(2) Cut out a total of 16 sphinx shapes, and now make Size 4 Sphinx. (If you think about it for a moment, you should see an easy way to do this.)

OK, those are the basic Sphinx puzzles. You’ve seen how smaller sphinxes can be made into larger sphinxes (or, conversely, how a larger sphinx may be dissected into smaller copies of itself). But this is just the beginning. If you want to keep going, here are some more challenges:

(5) Oh, and by the way, there are 4 different ways to make a Size 3 Sphinx. Can you find all 4? (I found this relatively easy.) Hmm, what about a proof showing there are only 4 ways? (Again, no idea!)

(7) While you are at it, how about making a Size 6 Sphinx? And then can you make a Size 7 Sphinx?

(8) It’s easy to make a Size 8 Sphinx. That’s a lot of pieces to cut out, though — you can cheat by drawing 4 smaller sphinx shapes onto each sphinx shape. Will this technique help you make a Size 5 Sphinx? (Not really, but…) If not, what about making other shapes that can be subdivided into sphinx shapes — will that help? (For what it’s worth, one mathematician used this approach to try to prove how many different solutions there are to the Size 5 Sphinx.)

There are still more puzzles and challenges to be found in the sphinx. You can find lots of them at the Mathematics Centre of Australia — click here.

The sphinx is one example of a rep-tile (self-replicating tiling), a polygon that can be dissected into smaller copies of itself. In shape, a sphinx is a pentagonal hexiamond (i.e., it has 5 sides, and it is made up by sticking 6 triangles together); further, it is an asymmetric rep-tile, since it comes in both left-handed and right-handed varieties and you need both varieties to dissect a sphinx. Note that a sphinx can be dissected into 4, or 9, or 25, or … copies of itself. According to the too-brief and not-entirely-accurate article at Wikipedia, the sphinx is the only (known?) pentagonal rep-tile.

Beyond this, I am getting in over my head. I think if the Sphinx had asked Oedipus to solve all 150+ Size 5 Sphinxes, he would have failed, she would have gobbled him up, and she would still be sitting outside Thebes terrorizing the city. Having said that, I would love to hear from you if you are a mathematician who can correct any errors I may made.

2 thoughts on “A sphinx puzzle”