Twenty years ago this month, I began working as a Director of Religious Education (DRE) in a Unitarian Universalist congregation. During the recession of the early 1990s, I had been working for a carpenter/cabinet-maker, so I had been supplementing my income with part-time work as a security guard at a lumber yard. Carol, my partner, saw an advertisement for a Director of Religious Education at a nearby Unitarian Universalist church. “You could do that,” she said. So I applied for the job, and since I was the only applicant, I got it. 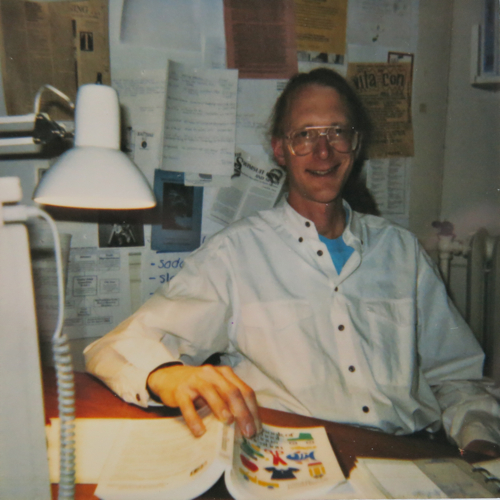 Above: Carol took this Polaroid photo of me sitting at my desk at my first DRE job. The computer in the left foreground is a Mac SE, and I have a lot more hair. It was a long time ago.

Sometimes I wonder why I’ve stuck with it so long. Religious education is a low-status line of work. Educators who work with children are accorded lower status in our society, because working with children is “women’s work,” and ours is still a sexist society. And religious educators are sometimes looked down upon by schoolteachers and other educators, because we’re not “real” educators. In addition to being low-status work, religious educators get low pay, and the decline of organized religion means our pay is declining, too, mostly because our hours are being cut, or paid positions are being completely eliminated.

Nor has Unitarian Universalism been kind to religious educators and religious education. Sometimes ministers and denominational leaders, who should know better, ask me when I’m going to go back to parish ministry and “get my own church” (and we needn’t go into the incorrect assumption that the parish minister owns a congregation). The constant decline in income at the Unitarian Universalist Association (UUA) has resulted in denominational funding for religious education being eviscerated. As an example of the decline of religious education funding, it is instructive to compare the production quality of curriculum books issued by the UUA: in the 1950s we had lots of professionally produced books, often written by top scholars; in the 1970s we had a smaller number of well-produced multi-media curriculum packages; in the 1990s we had nicely-designed paperback books produced in-house at the UUA; but in the 2010s we get to download Microsoft Word documents with amateur formatting. This decline in the quality of curriculum books is emblematic of a wider decline in funding and status. No wonder we have been seeing dropping enrollment in UU Sunday schools nationwide, during a time when we are seeing a population boom in school-aged children.

And I do love the work. A religious educator serves as an administrator, a master teacher, and a theological resource. I love religious education administration: curriculum design, supervision of teachers, project management, safety training, supervising employees, etc. I love being a theological resource: helping teachers place their teaching into a bigger theological framework, presenting the latest theological developments in terms that can be used in the classroom, mixing theological theory with theological praxis, etc. Above all, I love teaching: building long-term teaching relationships in which grades do not play a part, and which help move learners to become more ethical, more humane (i.e., what Confucius termed “ren”), more loving. 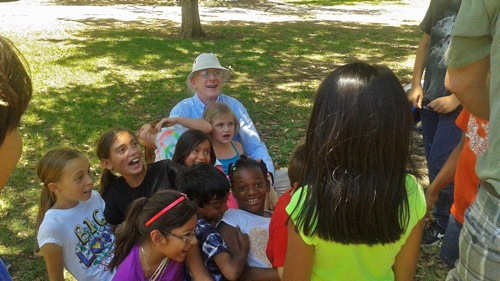 Above: Me as a religious educator in 2014, cynical but still having fun, at Peace Camp in San Jose (yes, we have media releases for all those legal minors); photo credit Geoff Rimositis

On the other hand, if someone offered me a higher-status job that was less satisfying but paid twice the money I’m making now, I’d probably take it; at least then I might have a hope of retiring before age 85.